Listening to often-ignored voices: ‘An Old Lady’ shows a sexual assault victim’s struggle to be heard

Listening to often-ignored voices: ‘An Old Lady’ shows a sexual assault victim’s struggle to be heard 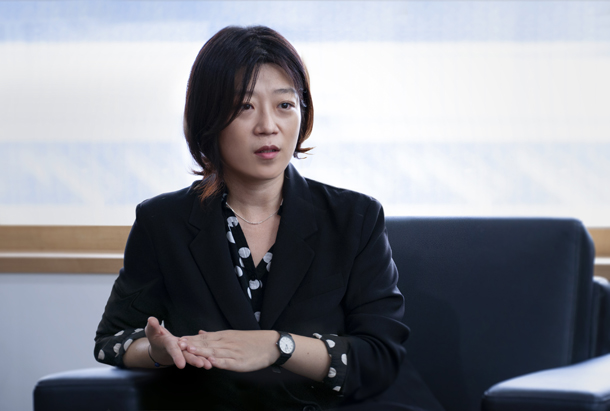 What would be your first response after hearing that a young man had raped an old woman? Would you believe it? Or would you scoff and say that “that’s unlikely to ever happen”?

“An Old Lady” is about just that. The film has been invited to the New Currents section at the 24th Busan International Film Festival (BIFF), which runs from Oct. 3-12. Shim Hyo-jeong (played by Ye Su-jeong) is a 69-year-old former caregiver living with her boyfriend Nam Dong-in (played by Ki Joo-bong). When she goes to an orthopedic doctor for knee treatment, she is raped by a young nursing assistant named Lee Joong-ho. After hesitation, she confides in Nam and decides to file a lawsuit against Lee for sexual assault.

Although the topic can be provocative, the film’s atmosphere remains placid. The film is set in the early 2010s when laws regarding punishment of sexual violence were relatively new, before it became a widely discussed topic in society.

The film follows Shim’s struggles and determination to do what she can to punish the assaulter. While doing so, the movie also sheds light on society’s perception of old people, especially old women living in Korea.

“Despite social perceptions and stereotypes surrounding her, Shim never gives up and does what she can [to bring Lee to justice],” said director Lim Sun-ae in an interview with the Korea JoongAng Daily.

The director wants the film to be the gateway for hidden victims to come forward and raise public awareness about such cases. Lim recently met with the press to discuss her debut feature film. The following are edited excerpts from the interview. 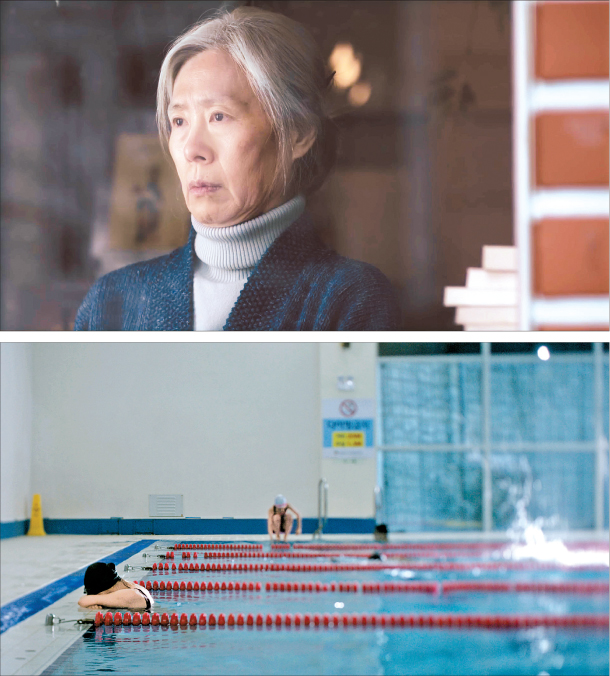 Scenes from the film “An Old Lady.” At top, Shim Hyo-jeong, played by Ye Su-jeong looks out of a window. Above, Shim, still suffering from her painful memories, tries to find relief through swimming. [KIRIN PRODUCTIONS]

Q. Where did you get the inspiration for the film?

A. I was searching on the web for ideas when I happened to come across a column about sexual violence inflicted upon old women. In that piece, it said, ‘The social stereotype that views old women as asexual beings is the primary reason why sexual assailants target them.’ [The perpetrators] believe that the women won’t report their crimes because they are concerned about what people around them would say about it. [I thought that] this was pure evil.

As I researched more about these cases before I wrote the script, I actually read about a case where the arrest warrant was dismissed because ‘it is highly improbable to say that a young man would have assaulted an old woman.’ As I continued to look through similar cases, I [began to think that] the assailant would have been arrested if the victim was a young woman.

There are a lot of films and content nowadays about sexual assault but there is nothing about the subject of old women [being the victims]. So I wanted to speak out first. When these topics are brought to light, we are able to start talking about them, and that’s when people realize that this is wrong. [Through the film], I wanted to show that this should be talked about, and there’s nothing embarrassing or strange about it.

You’ve managed to cast many experienced actors. Can you explain the casting progress? How did actors react when they read the script?

[The process] was truly amazing. I’ve sent the script to Ye, who was on the top of my list for the character of Shim. When she first contacted me to meet up, I initially thought that she must have wanted to be in the film. But I heard from Ye later that she wanted to meet me and tell me in person about her perspective on the script as a person in her 60s, regardless of her being in it.

Although I’m in my 40s myself, there may be biases or mistakes that I’ve made while portraying the old. So Ye pointed out those errors to me. The more I talked with her, the more I became certain that Ye should be the one to play Shim. Ye agreed to do it on the condition that we discuss the script more and revise it together. Of course I agreed to that as well.

For Ki, I had seen in the news that he was planning to start shooting another film [around the same time as my film]. So I was looking for someone else when Ye strongly recommended him. So I thought maybe I’d just reach out to him just in case, and as luck would have it, the other film had been delayed. So I immediately rang him up and gave him the script. He said yes almost instantly.

Can you give an example of a part that you and Ye worked on together?

It is implied in the story that Shim and Nam each had their own families before they met. Since they live together now, I think I wanted to portray their relationship as if they were a married couple. But Ye told me that she wanted the two characters’ relationship to be different from other relationships. When I also think about why the two were attracted to each other, I think they respected each other just for the people they are, regardless of their social status.

To be honest, I’m also married, and other married couples also sleep in separate rooms because they have different sleeping patterns. Likewise, just because they live together doesn’t mean that they should sleep in one bed. They’ve each been leading completely different lives for a long time [before they met], and Ye emphasized such points to me. She said, ‘would Shim share the bed that Nam shared with his deceased wife? I don’t think she would. I think she would have asked Nam to give her a bed in one of his spare rooms.’

Ye seemed to have had quite an influence in the script. Did the message you wanted to portray also change due to her involvement?

Actually it did. The first edition of the script - the one I showed to Ye first - was about the victim’s trauma regarding her sexual assault. Even if the perpetrator is legally punished, it doesn’t mean that the victim’s memories or pain disappear along with it. I was focused on that when Ye told me that to be a woman in her 60s raped by a young man, it would not be a matter of shame or humiliation. Her pride would be hurt.

As a person who cares about Shim deeply, Nam also tries to help her, but still unintentionally hurts her in the process. There were points when he must have also felt helpless and frustrated, and his pride is hurt too during the process.

So after meeting Ye, I didn’t want the film to have a young, secondary helper come to the rescue and resolve the problem for the couple. I wanted the film to be about these two people and how they resolve the issue for themselves, protecting their dignity and honor despite what had happened.

In the film, many people hurt Shim unintentionally with their words. What they say shows how society views old people, especially old women. Was that your intention?

I don’t think that only men inflict such pain upon old women. I didn’t want to target a certain age, gender or generation. It’s just all around us. When Shim goes for a swim, she hears other middle-aged women commenting on her figure. Lee, the perpetrator, also tells her that her legs are pretty.

Our society still demands a certain frame to build an image of a victim. When victims don’t fit into the criteria, they are often ignored or neglected. In the case of Shim, she was a caregiver, a job that requires bodies to be close. So a lot of things may happen, and it’s implied in the story as well. To ease how society views her, she always dresses carefully, as if her clothes are a shield. All of those little details reflect how society looks down upon old women.