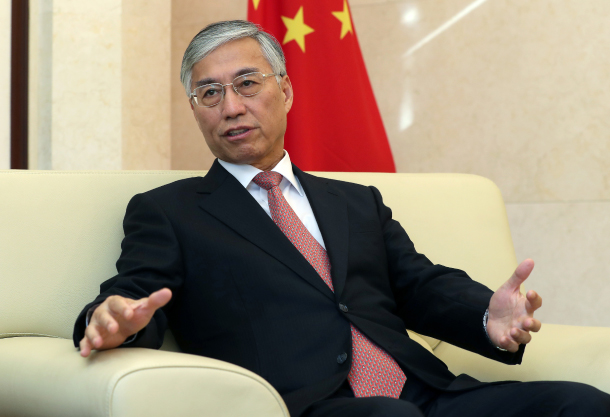 The United States and China’s struggle for hegemony is growing and even spreading to the Korean Peninsula.

China’s Belt and Road Initiative, also known as the “One Belt, One Road” strategy, is facing off against the U.S. Indo-Pacific strategy, affecting the Asia-Pacific region. Experts are especially concerned that South Korea might be the most harmed by such a prolonged U.S.-China hegemonic struggle.

Ahead of the celebration of the 70th anniversary of the establishment of the People’s Republic of China, founded on Oct. 1, 1949, Beijing’s top diplomat to Seoul sat for an exclusive interview with the JoongAng Daily.

Qiu Guohong, the Chinese Ambassador to South Korea, is a career diplomat, but he admitted he doesn’t like “diplomatic rhetoric” and opted for straightforward answers to questions.

Born in Shanghai, Qiu graduated from Shanghai International Studies University and joined the Chinese Foreign Ministry in 1981. He previously served as the Chinese ambassador to Nepal and director of security affairs at the Foreign Ministry before he was appointed as China’s top envoy to Seoul in 2014.

A. China is still a developing nation. Our development is not yet enough and irregular. In the future, the most important thing over a relatively long period of a time is development. China will become a strong, democratic, civilized, harmonious and modern socialist country through its efforts to achieve the Two Centenaries goals.

China’s four basic principles of foreign policy are amity, sincerity, mutual benefits and inclusiveness. However, calls for a “community of common destiny” seem to follow an aggressive diplomatic approach leading to continued concerns in the region.

We have advanced our relations with neighboring countries through our principles of amity, sincerity, mutual benefit and policy of getting along and building partnerships with neighbors. We enjoy good relations with an absolute majority of countries. While there are perceptions of a China threat, this is not mainstream. Chinese and South Korean people know well the Confucian saying, “Do not do to others what you do not wish others to do to you.” China, of course, will protect its rightful interests but will not pursue development at the cost of the sacrifice of another country’s interests.

The U.S.-China trade war is having a big impact on the Chinese, South Korean and global economy.

That is true. China and South Korea are both victims. This trade war is completely a unilateral provocation by the United States. We have already held 12 high-level negotiations and made great progress, reaching an agreement on most issues. However, the United States is constantly breaking agreements. It is infringing upon the sovereignty and dignity of China and making demands that we fundamentally cannot accept, heightening the trade war, making us suspect what the true intentions of the United States are. It is questionable whether the United States has thoughts on just resolving the trade issue or if it has some other scheme up its sleeve.

The U.S.-China trade war is receiving criticism for being a “lose-lose” game.

There is no winner in a trade war. China could, of course, see losses, as is the case for the United States. The trade war is having a negative effect on the global economy. China does not want a trade war, but we do not fear having to fight. But we are leaving open the door to negotiations. China’s fundamental measures to respond to the trade tensions are to take care of our tasks at hand and without wavering, strengthen reform and expand development.

The United States is pushing its Indo-Pacific strategy to face off against China’s Belt and Road Initiative.

The Belt and Road is an initiative for economic cooperation focused on infrastructure and construction to enable omnidirectional connectivity, bringing new dynamism in global economic growth and providing a new platform for international economic cooperation. By the end of August, China has signed a total of 195 documents on the Belt and Road cooperation with 136 countries and 30 international organizations. However, the U.S. Indo-Pacific strategy clearly has an aspect of targeting China, and we are opposed to it.

Are South Korea and China keeping faithfully to the initial spirit of the establishment of diplomatic relations on Aug. 24, 1992?

China joined the World Trade Organization (WTO) in 2001 committing to the promotion of free trade. But in protest of the deployment of the Terminal High Altitude Area Defense (Thaad) system to South Korea, China imposed economic measures against Korean companies like Lotte and even banned group tours to Korea.

The Thaad issue is related to China’s security interests. Chinese and South Korean relations faced hardships and complications over the Thaad issue. This was something that both sides didn’t want to see. Luckily, we have made efforts and reached a consensus to deal with the Thaad issue through a phased process, and our two countries’ relations have already returned to a path of development. Of course, our countries’ relations have to recover to the level of the best in history, and there has to be efforts in order to secure greater development. China has noted that the South Korean government reiterated many times that when the Korean Peninsula issue is resolved in the future, the Thaad issue will naturally be resolved. While the Chinese side does not agree to the correlation [South Korea’s stance that the North Korean nuclear and missile threats are the reason for the deployment of the U.S.-led Thaad system], we hope for the day for the issue to be resolved to come quickly.

It seems that many people are misunderstanding. An air defense identification zone is an alert area determined unilaterally by one country and not territorial airspace. Chinese military aircraft conduct regular drills in relevant airspace. We do not have any intention of violating the South Korean airspace nor did we violate international law.

China has faced some criticism that it is not faithfully implementing United Nations Security Council sanctions on North Korea even while Pyongyang’s provocations continue.

China, as a permanent member of the UN Security Council and a responsible power in the international community, is doing many things including faithfully implementing the resolutions on North Korea. At the same time, there is a need to review beginning discussions on the conditions required for reversing the related UN Security Council resolutions amid the easing of the situation on the Korean Peninsula. We need to support the process for political resolution through concrete actions.

Chinese President Xi Jinping has started his second five-year term, so what is the possibility of Xi visiting Seoul in the near future?

As ambassador, I have been pushing for many projects for his visit to South Korea. President Moon Jae-in on many occasions has invited President Xi, who has also accepted. What is left is the issue of timing.