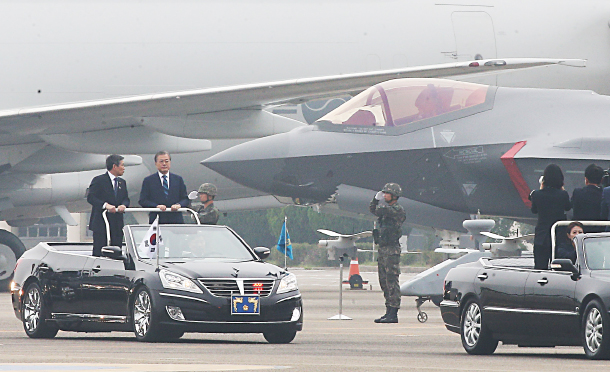 President Moon Jae-in, standing in the car on the right, reviews an F-35A stealth fighter during a ceremony to mark the 71st Armed Forces Day at an Air Force base in Daegu on Tuesday. [JOINT PRESS CORPS]

President Moon Jae-in on Tuesday pledged to build an unassailable military force capable of supporting peace building on the peninsula in remarks at a ceremony to commemorate Korea’s 71st Armed Forces Day.

The ceremony took place for the first time at an Air Force base in Daegu, home to the Air Force’s main combat force of F-15K jets, and featured an unveiling of the country’s new F-35A stealth fighter jets recently acquired from the United States.

In an address, Moon commended the military for defending the freedoms of every South Korean to enjoy peace and prosperity and said it was this defensive might that would buttress the country’s efforts to build a permanent peace regime on the peninsula.

“Peace should not be something to maintain but to create,” Moon said, according to a Blue House translation. “The impenetrable security of our armed forces underpins dialogue and cooperation, enabling us to embark on a bold journey toward permanent peace.”

Listing the strides made in the last year, such as the removal of guard posts jointly with North Korea in the demilitarized zone, U.S. President Donald Trump’s visit to Panmunjom in June and his own recent address to the United Nations General Assembly declaring zero tolerance for war, Moon said they were “made possible due to our military’s decisive determination to forge an inter-Korean military agreement and put it into practice.”

To demonstrate his commitment to the country’s homegrown arms industry, Moon arrived at the ceremony on South Korea’s first domestically built military helicopter, the KUH-1 Surion, and made a tour of a lineup of around 30 of the country’s finest military vehicles and equipment.

“Only a stronger force can assure our national security as well as peace in Northeast Asia,” Moon said in his speech. “We will actively respond to any whatsoever threat to our security through a stronger and precise missile defense system, a new submarine and light carrier-class amphibious assault carrier and new cutting-edge security systems like military satellites.”

Those jets were acquired by South Korea in an agreement with the United States signed in 2014 that allowed Seoul to buy a total of 40 F-35As from U.S. defense contractor Lockheed Martin for a price of around $6.8 billion.

Last month, the South Korean military received four new F-35A jets, putting its total at eight, with five more expected by the end of this year. The remaining 27 jets are expected to be delivered by 2021. These deployments prompted a fierce backlash from North Korea, which accused the Moon administration of plotting to invade its territory by beefing up its arms while simultaneously seeking diplomatic engagement.

Moon stressed the military’s role in Korean history and its experiences through the independence movement from Japanese rule and the 1950-53 Korean War. He said Korea’s armed forces always faithfully stuck to their role of preventing war since then.

Moon said his administration would continue its efforts to realize his signature “Defense Reform 2.0” initiative in order to build a “strong and smart military” capable of employing new technology towards enhancing national defense.

Tuesday’s ceremony also appeared to contain several oblique messages to Japan, amid strained bilateral relations as a result of Tokyo’s economic retaliations against Seoul over a host of historic issues.

Moon stressed the role of the military’s roots in armed Korean independence movements, and Air Force F-15K jets flying over the Dokdo islets - South Korea’s easternmost territory, which is also claimed by Japan - were featured live through a video feed at the event. Also notable was a martial arts demonstration by the Defense Ministry’s traditional honor guard based on the “Muyedobotongi,” a military field manual from the 18th century commissioned by King Jeongjo of the Joseon Dynasty (1392-1910).

Some of the swordsmanship techniques displayed at the ceremony were created specifically to fight Japanese invaders in 16th century, while the music that played in the background came from the film “The Admiral: Roaring Currents,” a war film about Korea’s most esteemed military hero, Admiral Yi Sun-sin, who defeated the Japanese.