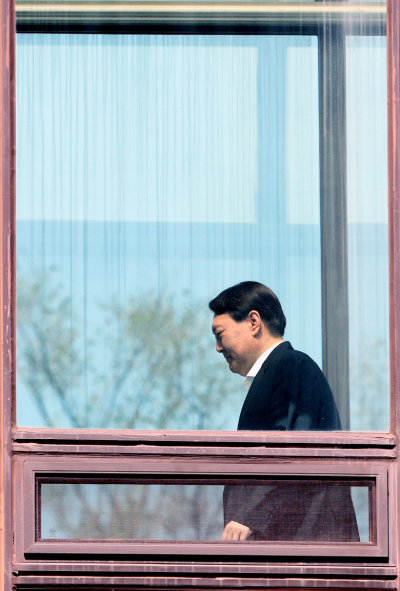 Prosecutor General Yoon Seok-youl walks to a cafeteria in the Supreme Prosecutors’ Office in Seocho District, southern Seoul, to have lunch on Monday. [NEWS1]

Prosecutor General Yoon Seok-youl said Tuesday that he will shut down special investigation departments - teams of elite prosecutors who handle high-profile cases that are often political - in most regional branches.

All special investigation departments will be shut down except for three, including the unit at the Seoul Central District Prosecutors’ Office, which currently investigates Justice Minister Cho Kuk’s family over alleged admissions fraud and suspicious fund investments. Other reform measures were also announced Tuesday.

“Following the president’s message that the prosecution must prepare a reform plan to win public trust, we will listen to the opinions of the people and members of the prosecution regarding the agency’s ways of exercising prosecutorial powers and conducting investigations and organizational culture,” the Supreme Prosecutors’ Office said Tuesday in a press release. “Based on the opinions, we will create a reform plan in which human rights are treated as the top priority.”

The prosecution also said it will review the ways it has exercised prosecutorial powers and conducted investigations such as summoning suspects publicly, allowing media to take photos of suspects, announcing the suspected crimes of suspects and conducting late night questionings. Those practices have long been criticized as human rights violations.

“Based on the reviews, we will create operational guidelines that are effective and respect human rights,” the prosecution said. “We will also create a more horizontal internal culture by ending the seniority-based hierarchy.”

Yoon announced three immediate changes ahead of a more comprehensive reform plan. He ordered the shutting down of special investigation departments as the first step.

Yoon also ordered the withdrawal of all prosecutors dispatched to government institutions. That practice has been criticized as a way for the prosecution to expand its influence to other parts of the administration.

The prosecution also decided to end the practice that chief prosecutors are offered exclusive vehicles. The change will be made voluntarily by the prosecution, without waiting for the Ministry of Justice to revise internal regulations governing the prosecutors, it said.

The prosecution said it will respect the National Assembly’s decisions for reforms that require revisions of laws and cooperate with the Justice Ministry. “In the meantime, Yoon intends to make changes that the prosecution can make on its own as quickly as possible,” the statement read.

Yoon’s reform plan appeared to be a preemptive move following Moon’s repeated warnings. Following a demand last week for reform by the prosecution, Moon gave a public order to Yoon on Monday to swiftly present a reform plan.

The directives were given during Moon’s meeting with Justice Minister Cho in a public message, and Yoon was conspicuously absent in the discussion.

Moon said Monday that Yoon must “listen to the opinions of the public as well as young prosecutors, women prosecutors and prosecutors in the criminal department and criminal trial and civil litigation department.” The order was interpreted as a demand to weaken special investigation departments that handle high-profile cases such as the ongoing probe into Cho’s family.

Yoon’s decision to announce the shutting down of special investigation departments is conspicuous, as it directly defies Moon’s directives. On Monday, Moon said the reform plan should be enforced after the prosecution’s ongoing probe into scandals surrounding Cho and his family is completed in order to avoid any misunderstanding that it is intended to put a damper on the investigation.

Insiders in the prosecution and the legal community are split about Yoon’s move.

Some said Yoon is surrendering to repeated pressure by the Blue House and the Justice Ministry by shutting down the special investigation departments.

Others, however, said Yoon was sending a message to the administration that he will accept all reform measures, but the investigation into Cho and his family will proceed, rejecting the argument of many in the ruling party and the Blue House that the probe was meant to resist reforms.

Yoon’s announcement of the reform measures were made as the ruling Democratic Party (DP) formed a special committee with veteran lawmakers to force internal changes in the prosecution.

Buoyed by a massive public rally on Saturday to support Cho while denouncing the prosecution’s probe into the justice minister and his family, the DP formed the committee and held its first meeting on Tuesday.

The lawmakers said they will help the Justice Ministry change enforcement ordinances and regulations governing the prosecution because that does not require the National Assembly’s approval.

During its meeting with the DP on Sept. 18, the ministry unveiled the reform plan.

As of now, a bill on the establishment of a new investigative agency for senior public servants’ crimes, designed to significantly weaken the prosecution’s powers, is pending in the National Assembly.

The deadline for its voting is in early December, but the ruling party wants to vote on it in late October or early November.

In the meantime, it wants to use the coming weeks to change regulations governing the prosecution.