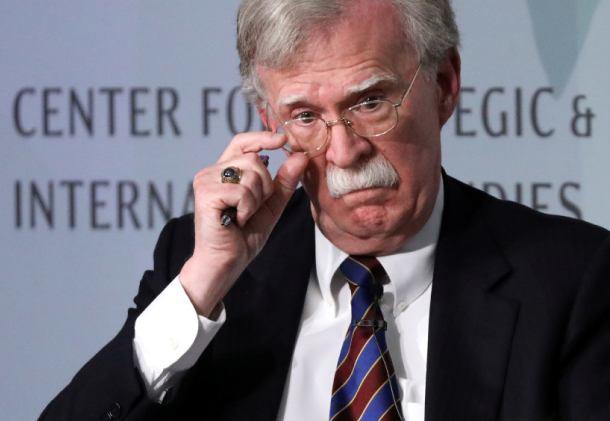 John Bolton, the former U.S. national security adviser, warned that North Korean leader Kim Jong-un will never “voluntarily” give up nuclear weapons but rather enhance them, while speaking at the Center for Strategic and International Studies (CSIS) in Washington Monday.

“It seems to me clear that the [North] has not made a strategic decision to give up its nuclear weapons,” said Bolton in his keynote address at the JoongAng Ilbo-CSIS Forum 2019. “In fact, I think the contrary is true. I think the strategic decision that Kim Jong-un is operating through is that he will do whatever he can to keep a deliverable nuclear weapons capability and to develop and enhance it further.”

Bolton, a hard-liner on North Korea policy, continued, “He may try to get relief from international sanctions, he may make some concessions, but under current circumstances he will never give up the nuclear weapons voluntarily.”

This marked Bolton’s first public comments since he was ousted by U.S. President Donald Trump last month over disputes on his handling of foreign policy including the North Korea nuclear issue.

Bolton noted that in a scenario where North Korea keeps its nuclear weapons, it “could become the new A.Q. Khan, the Walmart or the Amazon of deliverable nuclear weapons.” It could also lead to “more nuclear weapons states in Asia, like Japan, like South Korea,” he added.

He said the United States is now in a “classic standoff with North Korea.”

Bolton was critical of any sort of “partial lifting of sanctions” on the North and called any “action for action” as a way “to sustain their authoritarian political system, keep their economy going, and yet still have the benefit of the bulk of their ballistic missile and nuclear programs.”

Bolton again raised the possibility of military actions against the North.

He said, “It is unacceptable for North Korea to have nuclear weapons; at some point military force has to be an option.” Other options, he said, include a regime change or reunifying the two Koreas under a freely elected government similar to South Korea, scenarios unacceptable to Pyongyang.

He also noted that time “almost inevitably benefits the proliferant,” directly contradicting Trump’s repeated mantra that there is “no rush” for negotiations with North Korea.

Bolton again touted the Libya model of 2003 and noted that even Libyan leader Muammar Qaddafi made “the clear decision that he was going to give up nuclear weapons.” In contrast he said that he has not seen anything like that from North Korea.

He noted that Libya dismantled and shipped out its nuclear arsenal to Oak Ridge, Tenn., “where the Libyan nuclear weapons program now resides” before receiving any concessions.

Bolton added, “By the way, there’s plenty of room for the North Korean nuclear program too” at Oak Ridge.

While Bolton said “it may be the Libya model is not possible,” it was worse “pretending that you’re getting to a resolution of the nuclear issue when you simply allow North Korea still to have a nuclear capability but give it enough economic assistance” that “gives the regime a lifeline it currently doesn’t have.”

Trump told reporters at the White House on Sept. 11 that his former national security adviser had made “some very big mistakes” and that they were “set back very badly when John Bolton talked about the Libyan model.”

The Libyan model is seen by Pyongyang as a direct cause of the downfall of Qaddafi and his death in 2011.

Bolton during his speech Monday also noted it was a “big mistake” for the United States not to pay more attention to the tensions between South Korea and Japan and noted the repercussions they could have on trilateral cooperation with the United States.

“I am almost without words to describe how distressed I am that these tensions between South Korea and Japan have grown to the point where they currently are,” said Bolton and that the “American passivity on this point has been a mistake.”

Bolton said that “if the United States does not operate here, we face a very serious deterioration of alliance capabilities at precisely the wrong time.”

He was especially concerned of South Korea’s decision to terminate its bilateral General Security of Military Information Agreement (Gsomia) with Japan, and said that it was “something that requires urgent attention by the United States.”