The biggest homegrown weapons development project in Korean history is about to take off as Seoul begins production for its new cutting-edge, multi-role fighter jets known as the KFX.

The design for the KFX, which stands for Korean Fighter Experimental, is the result of almost two decades of planning that cost the government approximately 8.6 trillion won ($7 billion). Once production begins on 120 units of the new jet, which is scheduled to start in 2026, an additional 10 trillion won will be needed, putting the bill for the entire project at around 18.6 trillion won.

According to Ryu Kwang-soo, head business manager of the KFX project at Korea Aerospace Industries (KAI) - the project’s main developer, around 9,300 out of the approximately 12,000 detailed blueprints needed for the KFX project are complete - 78 percent of the project, including key components.

As a major national project, development for the KFX was led by the government’s Agency for Defense Development (ADD) and KAI, but approximately 225 private firms also partook in the process, including all of the country’s major defense contractors. Foreign stakeholders in the project include Indonesian Aerospace and the U.S. company Lockheed Martin, which provided technical assistance and several pieces of technology integral to the jet’s development.

The KFX, a twin-engine fighter superior to the U.S.-built F-15, is set to replace the Air Force’s fleet of F-4 and F-5 fighters that were first purchased in the 1960s. By the time the first units of the jet are operationally deployed in 2026, the military capacity of Korea’s Air Force will have advanced leaps and bounds.

While the KFX is classified as a 4.5-generation fighter with avionic and strike capabilities upgraded from the fourth-generation of combat aircraft built since the 1980s, it already possesses several stealth features and superior performance that could, with upgrades, possibly put it on par with the latest fifth-generation stealth aircraft. 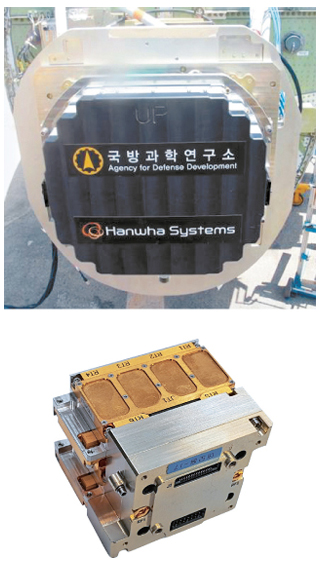 Top: The AESA radar to be equipped on the KFX, as revealed by the Agency for Defense Development last Thursday. Above: A scaled-down module set of the same AESA radar, smaller than a person’s fist. [AGENCY FOR DEFENSE DEVELOPMENT]

KAI has been reluctant to reveal precisely what type of stealth mechanisms the jet is equipped with, but its radar cross section (RCS) - the primary measure of stealth on military aircraft - measures only 0.5 square meters (5.4 square feet). The smaller the RCS is, the stealthier the aircraft.

According to GlobalSecurity.org, a military data website, the U.S. Navy’s F/A-18E/F and France’s Dassault Rafale jets have an RCS of 1 square meter, the F-15 has 25 square meters and the fifth-generation F-35 has just 0.005 square meters.

To allow the jet to hold such equipment, KAI designed the KFX’s fuselage to resemble a stealth jet akin to Lockheed Martin’s F-22. Most of the sensors are located inside the aircraft, while the four air-to-air missiles installed on the KFX are half buried in the central part of the fuselage. Space was also left on the aircraft for the future installation of an internal weapons bay - a characteristic component of stealth fighters.

According to one KAI spokesperson, once the KFX’s stealth capacity is enhanced, it will be comparable to the F-117 - Lockheed Martin’s famed stealth attack aircraft that outclasses the F-35 in numerous ways.

Capable of performing sharp maneuvers midcourse, the KFX jet is already set to be equipped with a host of cutting-edge equipment that makes it one of the world’s finest non-stealth combat aircraft.

It far outmatches any aircraft owned by North Korea, which still largely operates Soviet models, as well as even those of China or Japan. In the event that aerial warfare breaks out in Northeast Asia, the Korean Air Force’s F-35As are set to face off against the enemy’s stealth aircraft, while its KFX and F-15K jets can hold off any hostile non-stealth aircraft. Once the KFX is upgraded in terms of its stealth functions, foreign powers may find it difficult to challenge Korea’s dominance over its own skies.

When development began on France’s Dassault Rafale or the U.S. F-35 jets, the novelty of the technology inflated costs and caused several difficulties,” said Jeong Gwang-seon, the head of the KFX business project at DAPA. “We had an advantage when developing the KFX, since we could refer to these advanced countries’ technology and development process.”

Given that it was designed with export in mind, around 65 percent of the jet’s components are domestically produced. While a single unit of the jet is currently estimated to cost around 80 billion won to build, producing a larger volume could mean these costs could lower over time.

Exporting the jet and its key components could also open the doors to a variety of new opportunities for Korea’s defense industry. In particular, the country is moving toward domestic development for its air-to-air and surface-to-air missiles - a key part of its defense strategy against North Korea’s advancing missile program - through the experience it has gained through the KFX program.

Lee Il-u, a managing director at KAI who led the development of the KFX’s fuselage, said the project allowed Korea’s development capacity for combat aircraft to “advance beyond” that of Britain or France.

But the path to get here was by no means smooth. In 2001, former President Kim Dae-jung promised that Korea would begin developing its own next-generation fighter jets, but the 13 years since were wasted. Five separate feasibility studies were conducted by relevant organizations, but few were willing to stake their careers on a project of such an astronomical cost and risk at a time when Korea lacked the necessary technology.

One of the biggest hurdles to the project came in 2015, when the U.S. government refused to allow the transfer of four of the 25 crucial technologies that Lockheed Martin agreed to provide Korea in exchange for Seoul’s purchase of its F-35 jets. Among these was an advanced radar system known as the Active Electronically Scanned Arrays, or ASEA, a game-changing component equipped in virtually all the latest generation military aircraft.

Conventional radars with rotating antennas can only perform one function per unit, so aircraft must be equipped with multiple radar units to be capable of a variety of tasks like surveillance and tracking. AESA radars, on the other hand, are made up of a thickly packed matrix of small transmit and receive modules (TRM) that allow them to put out differently shaped signal beams that can rapidly and simultaneously detect and track multiple targets in the air, at sea or on the ground.

Korea’s defense industry was thus forced to venture into terra incognita virtually blind in order to develop an ASEA radar for the KFX. The resulting domestically produced model has 1,088 TRMs compared to the approximately 1,200 TRMs on the F-35’s AESA radar.

“ADD had the technology but the firm [Hanwha Systems] had no experience in making the radar, so we were concerned,” said Shin Hyun-ik, a radar development director at ADD. “But we have now become the 11th country in the world to develop an AESA radar.” Even Israel’s ELTA Systems, a global leader in defense electronics, rated Korea’s AESA radar as superior to that of Israel’s.

A scaled down model of the AESA radar with 16 modules revealed by Hanwha Systems at its research center in Yongin, Gyeonggi, on Sept. 18 looked no larger than a fist. Yet it cost around 45 million won to build. Importing such a radar from abroad is estimated to cost around 80 million won. Close to 365.8 billion won has been invested into developing the AESA radar until 2026, but engineers have completed approximately 85 percent of its hardware. All parts of the radar will be produced domestically starting from next year. The radar will also be tested in Israel by next spring, followed by another flight test in Korea from next November. From 2023, it will be installed on the KFX prototype for a final round of testing.

The development of the aircraft’s fuselage and system integration was also an enormous task. According to Ryu, KAI had to revise blueprints put out by the ADD during the exploratory stage a total of nine times before getting something that was to their satisfaction. Another major problem they encountered was reducing the weight of the jet. The target weight for the KFX was 12.1 metric tons (13 tons), but designers had to reduce an additional 500 kilograms (1,102 pounds) to account for future additions. “So we opted to offer 100,000 won in incentives to every researcher who was able to take off a kilogram off the jet’s weight,” Ryu said. Equally complicated was the process of seamlessly integrating the approximately 230,000 component parts - minus the engine - into the aircraft’s design, a number far greater than the average car, which has around 20 to 30,000 constituent components.

At KAI’s factories in Sacheon, South Gyeongsang, around 1,250 researchers and engineers are hard at work developing the KFX. These professionals will also take on the role of transforming the jet into a stealth fighter, and eventually will begin preparations to work on the sixth-generation of combat aircraft. The KAI plans to release a prototype of the KFX by April 2021, and, after sufficient test flights, the first batch of eight jets are set to be delivered to the Air Force by 2026. Concerns remain, however, that the four-year duration reserved for flight tests may be insufficient to test out the weapon, since it is shorter than the five to eight years that advanced countries normally allocate for such testing.