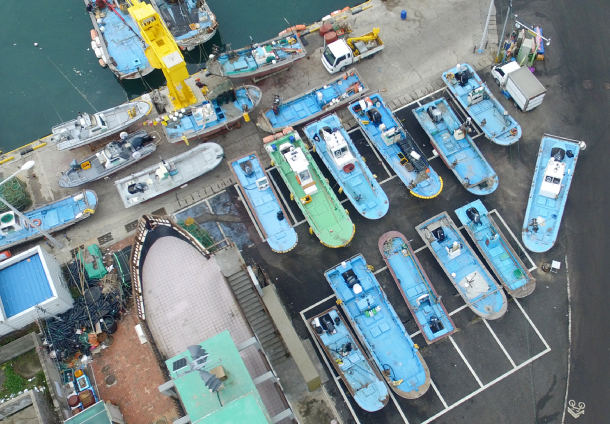 Fishing boats were moved into a parking lot at Jeongja Port in Ulsan on Tuesday as Typhoon Mitag is expected to pass through the Korean Peninsula around midnight on Wednesday. Local weather forecasters said Tuesday that Typhoon Mitag will likely land on the southwestern coast of the Korean Peninsula around midnight Wednesday, far earlier than previously expected, due to changes in regional atmospheric pressure. Mitag, the season’s 18th typhoon and the seventh to affect the Korean Peninsula this year, was previously expected to make landfall in southwest Korea around 9 a.m. Thursday. In its latest weather update, however, the Korea Meteorological Administration (KMA) said the arrival of the mid-strength typhoon on Korea’s mainland is expected to occur around midnight Wednesday, adding it will then pass over the nation’s southern regions before exiting to the East Sea on Thursday afternoon. Mitag was moving north from waters 270 kilometers (168 miles) north-northeast of Taipei at a speed of 22 kilometers per hour as of 9 a.m. Tuesday. Its central pressure was reported to be 970 hectopascals, with a maximum wind speed of 35 meters per second. Mitag is expected to reach waters off Shanghai, China, Tuesday afternoon and waters west of Jeju Island on Wednesday evening before hitting the coastal regions of South Jeolla Province late Wednesday night, the KMA said. “Typhoon Mitag is heading north along the edge of the North Pacific high pressure. Due to a slight contraction of the high pressure, the degree of the typhoon heading west has weakened, thus cutting short its route toward the Korean Peninsula,” a KMA official said. The KMA has issued heavy rain warnings for Jeju Island and the southwestern provinces of Jeolla, forecasting 100 to 300 millimeters (3.9 to 11.8 inches) of rainfall in those areas by Thursday. [YONHAP]