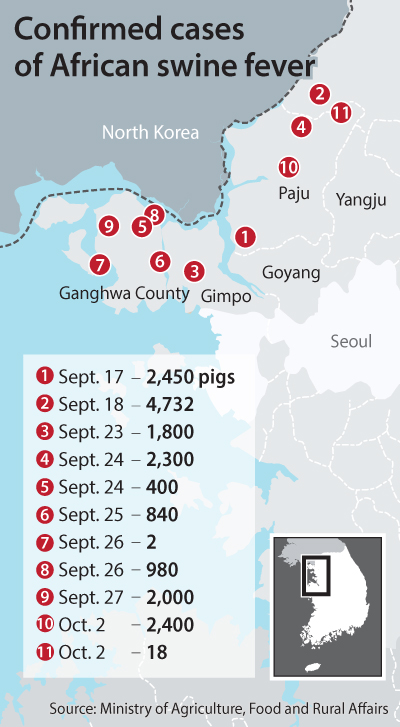 The confirmations brought the total number of infected sites to 11. The government ordered a new 48-hour lockdown, effective until 3:30 a.m. on Friday, on pig farms, slaughterhouses, feed factories and related vehicles in Gyeonggi, Gangwon and Incheon.

According to the Ministry of Agriculture, Food and Rural Affairs, the 10th infected site reported suspicions of the disease on Tuesday after one female pig died and four other pigs showed signs of appetite loss, a symptom of the disease. The illness on the 11th farm was identified during a precautionary government inspection on Tuesday.

The government is set to cull over 14,000 pigs at the 10th site and at nine farms within a 3-kilometer radius and 2,603 pigs at the 11th confirmed site and two farms in its proximity.

The latest confirmations heighten concerns that the disease could still be spreading. The ninth infected farm was confirmed on Sept. 27 in Ganghwa County in Incheon.

Paju had been under strong containment measures as the original outbreak site. The region came under multiple 48-hour lockdowns and had been designated a special management region, undergoing extensive fumigation measures.

The virus has only infected farms in the northern parts of Gyeonggi.

On Sunday the government was on full alert when a farm in South Chungcheong was suspected of being infected. However, the test results were negative. The spread of the virus to South Chungcheong would have been serious as 20 percent of the pigs raised in Korea are raised in the province.

Individuals who violate the lockdown face a one-year prison sentence or a fine of up to 10 million won ($8,300).

The government even ordered a ban on guns to poach wild boar in the border area, in case the hunting encouraged infected wild animals to roam further.

The battle against the disease is focused on physical containment as the virus, which has an incubation period of 19 days, has no effective treatment or vaccination for prevention.

The government has yet to determine the cause of the outbreak.

While it believed that the disease spread from pigs or wild boar from North Korea, which had an outbreak of the disease in May, the government has yet to find evidence supporting the theory.

Government inspections last month could not find infected wild boar carcasses near the confirmed sites or find traces of the virus in bodies of water near the border with North Korea.