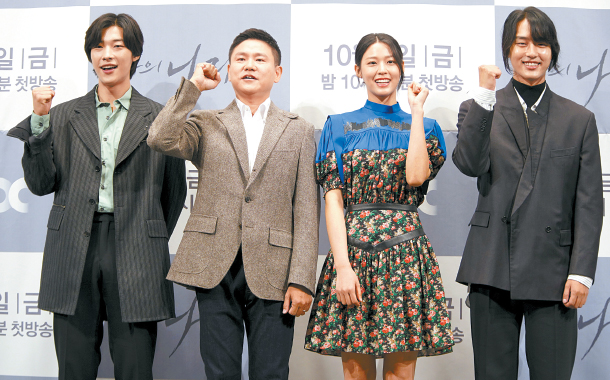 From left, actor Woo Do-hwan, director Kim Jin-won and actors Kim Seol-hyun and Yang Se-jong pose for photos at a press conference for the upcoming JTBC drama series “My Country: The New Age” at the Imperial Palace Seoul Hotel, southern Seoul, on Wednesday.

The way that Yi Seong-gye, the founder of the Joseon Dynasty (1392-1910), took over the falling Goryeo Dynasty (918-1392) has been a popular subject in many dramas and movies over the years.

The upcoming JTBC drama “My Country: The New Age” is another drama that will tell the famous story of Yi, but according to the company, the narrative will take place outside the palace.

While veteran actors Jang Hyuk and Kim Young-cheol play the historically important characters Prince Yi Bang-won and Yi Seong-gye, the drama is focused on the young, ambitious characters who struggle to realize their values and goals in the midst of the transition to a different dynasty. The roles are played by young actors Kim Seol-hyun, Yang Se-jong and Woo Do-hwan.

Kim, Yang and Woo portray that characters Seo Hwi, Nam Sun-ho and Han Hee-jae. Although they each have bitter pasts of their own, they share one common ambition, to start anew, rising above the ranks of the social hierarchy to get a chance to alter their fates that were previously determined by their low social status during the Goryeo Dynasty.

The first episode airs this Friday, and even before the premiere, the drama has been generating buzz for its immense production cost of over 20 billion won ($16.5 million), which put a lot of pressure on the shoulders of director Kim Jin-won.

“I know that there have been many dramas and films about this era,” the director said. “But as I researched what else I could tell viewers, I wanted to put a spotlight on characters other than the usual protagonists in our history. For those ordinary citizens, it may not be that important that their country is going through a great transformation of a dynasty. They have their everyday chores, families and lives to take care of. I hope viewers can follow along with their narratives and perspectives.”

All three actors said that the reason they chose to appear in the drama series was the exciting story. Woo and Yang both said that they felt “their hearts beat faster” as they read through the script.

“I think the point that the viewers should look out for is their growth,” Woo said. “[The three characters] all have different backgrounds which shape their opinions and views, and I hope [viewers can see] how they protect their loved ones and their values or how [their values] change due to their hardships.”

Kim also fell in love with her character and made time to appear in the drama despite the tight schedule she has while balancing her singing and acting career. The actor is a member of the girl group AOA and appears on the Mnet survival program “Queendom.”

“I was worried about the tight schedule,” Kim said. “But [as I adapted to the schedule], one thing that I realized was that I was stronger than I thought (laughs). Also I never felt tired while I was on the set because the atmosphere was so good. Rather, I felt my stamina rising from the rush of endorphins I got from being so excited [to be on set].”

The drama will air on Fridays and Saturdays and will also be streamed worldwide on Netflix.