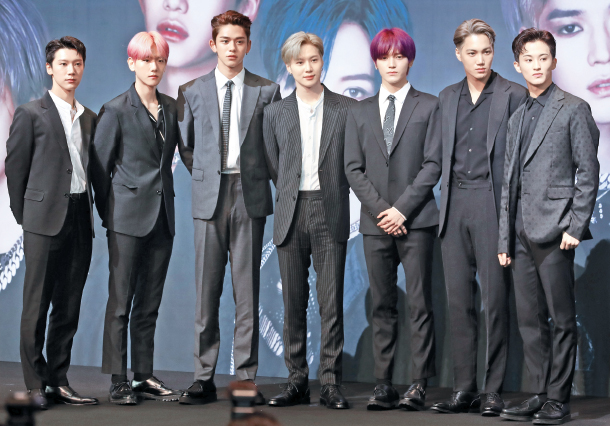 Members of SuperM, a collaboration between SM Entertainment and Capitol Music Group, met with local press on Wednesday at the Seoul Dragon City hotel in central Seoul, prior to their official debut on Friday. From left are: Ten, Baekhyun, Lucas, Taemin, Taeyong, Kai and Mark. [YONHAP]


The members of SuperM, SM Entertainment’s biggest project yet, met with local press on Wednesday, prior to their official debut on Friday, and expressed their excitement for the start of a new chapter in their careers.

“It felt so new when I first heard about the project,” said SuperM member Baekhyun. “I’ve seen the other members perform and thought they were good, but to actually perform together as a group feels amazing. It feels like my second debut. It might be a long road ahead, but it’s refreshing.”

SuperM is made up of members from SM Entertainment’s biggest acts - Taemin of SHINee, Baekhyun and Kai of Exo, Taeyong and Mark of NCT 127 and Lucas and Ten of WayV.

According to the agency, the M of SuperM stands for “Matrix & Master,” meaning that SuperM will be a “leading group of stars that will give ‘super’ energy to their fans.”

Steve Barnett, president of CMG, and Lee sent congratulatory remarks through a video message during the press conference.

“We have amazing plans to make a huge impact around the world with SuperM,” Barnett said.

Lee added, “This has been tough, but also very exciting. To have the chance to present Korean - and Asian - content in Hollywood, the core of American culture, is very fulfilling both personally and for K-pop. I hope to present a new ‘culture universe,’ through which the east and the west can meet. SuperM is just the beginning.”

Elements of Lee’s vision for cultural fusion can be seen in certain details of the album, such as the fact that the drums for the song “I Can’t Stand The Rain” are traditional Korean drums called buk, rather than the typical western drum set.

SuperM’s self-titled debut EP has five tracks in addition to “I Can’t Stand The Rain”: the lead song “Jopping,” followed by “2 Fast,” “Super Car” and “No Manners.” “Jopping” is a combination of jumping and hopping, according to Mark.

“We came up with the word [for the song], to conjure up a party-like mood. The song actually has a very strong vibe and goes perfectly with our choreography. It’s strong and powerful,” he said.

While the union of seven members of different groups may have been a cause for concern for some fans, the guys themselves were surprised at how well they got along with each other. The idea of mixing certain members of groups that are still active - such as NCT 127 and Exo, who each have their own concert tour schedules - may not be easy, but the opportunity was too good to turn down.

“We all have different experiences in our own groups,” said Baekhyun. “I wondered how we would be together, since we all had different skills and we didn’t know how the seven individuals will work together. But when we practiced the choreography for ‘Jopping,’ I was surprised at how well we fit with each other. Looking at the mirror, I could actually see our super synergy.”

He added, “Fans may worry that being in Exo and touring with them as well as this team will be tough. But, do you see the name of our group? We’re super. It will be tough, but we can pull both off.”

When asked to describe what the color of the group is, the members had different ideas. While Kai said that the group was white, blank and clean, Baekhyun said the group was black - a mixture of all colors.

“We all had different colors as groups. And when you put the colors together, it becomes black. I would like to say that we’re black, a color that stands out from the rest,” he said.

SuperM will hold their debut showcase on Saturday in Los Angeles at Capitol Records Tower. The event will be called “SuperM: Live From Capitol Records in Hollywood” and will be streamed live through SM Entertainment’s official YouTube channel.

“It feels like a dream to launch in the American market,” said Taemin. “When I debuted [as a member of SHINee] in 2008, we mostly traveled to Japan or China. When we did get to perform in the United States, it felt like a dream to see that people there listened to our music and saw our culture. But to start there with these members… Some people call us the K-pop Avengers. We’ll work hard to live up to the name. We can’t be greedy from the start, but we’ll be a group that grows with every step.”

Their first EP “SuperM” will be available on local music services at 6 p.m. on Friday, after the music video for “Jopping” is released at 1 p.m. on the same day. A SuperM pop-up store will be open from Oct. 7 to 13 at SM Entertainment’s Celebrity Center in Apgujeong, southern Seoul, and in Los Angeles from Oct. 6 to 13.