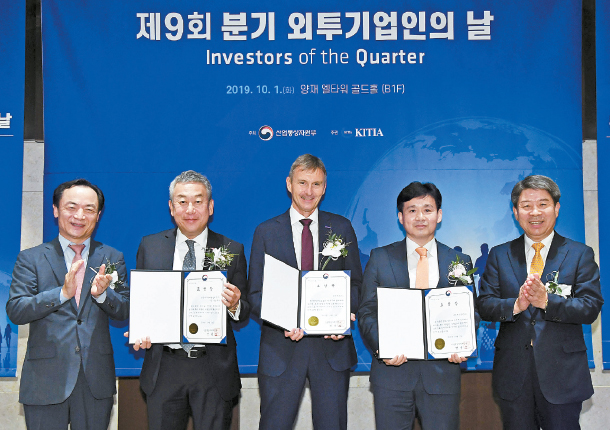 From left: Jung Dae-jin, director general of cross-border investment policy at the Ministry of Trade, Industry and Energy; Andrew Ryu, country manager of Dow Korea; Glenn Young, managing and representative director of Merck Korea; Lee Kyeong-bum, general manager of Emuge-Franken; and Lee Sung-hyun, chairman of the Korea Foreign Company Association, pose for a photo during the ninth Investors of the Quarter event held in Seoul on Tuesday. Merck Korea received the Ministry Award of Trade, Industry and Energy during the event along with Dow Korea and Emuge-Franken. The Trade Ministry has been offering awards to foreign direct investment companies that contribute to industrial development and job creation at the recommendation of local governments and the Korea Trade-Investment Promotion Agency since 2017. [MERCK KOREA]