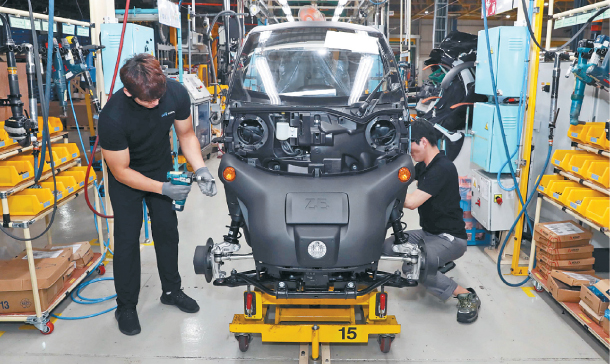 Busan has become the sole production base for Renault Samsung Motors’ micro electric vehicle (EV) Twizy, and the carmaker celebrated the start of production on Tuesday.

Renault Samsung Motors’ CEO Dominique Signora said during the event that he hopes Busan becomes a core base for eco-friendly car production, starting with the production of the Twizy.

Twizys used to be produced in Valladolid, Spain, but the production line has been completely relocated to Korea under a deal inked between the carmaker, the Busan Metropolitan City and local car parts manufacturer Dongshin Motech in December last year. Under the deal, all Twizys - sold domestically and internationally - will be produced in Busan.

While the production line has been recreated at Renault Samsung Motors’ Busan factory, local car parts maker Dongshin Motech will actually take charge of production. The Korean unit of the French carmaker Renault will supply parts and offer technological support for production. The Busan government will give administrative and financial support for facility and sales expansion. 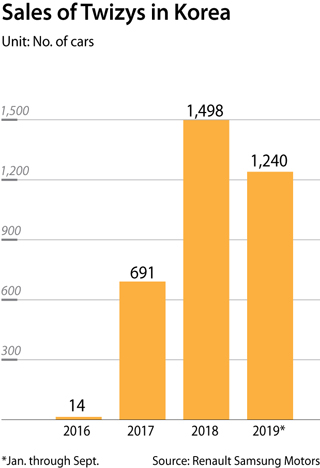 Currently, the Busan factory has the capacity to produce 5,000 Twizys per year. The carmaker said it will expand facilities depending on demand. It is hoping global Twizy sales reach 15,000 units as the tiny vehicle enters new markets like Southeast Asia.

While the micro EV has not yet entered the Southeast Asian market, it is planning to use Busan as a base to enter the region with high sales potential for small cars useful for getting through heavy traffic and traversing narrow roads.

Twizy launched in Korea in 2016, and its sales have gradually increased since then. While only 14 units were sold in 2016, sales volume grew to 691 units in 2017 and nearly 1,500 units last year, according to figures from the carmaker.

With the car being ultra-compact in size, the automaker said it can be used for commuting as well as for delivery services and localized patrol cars.

“Based on support from Renault Samsung Motors and Busan Metropolitan City, we will put in efforts to make sure Twizy meets [various] consumer needs,” said Lim Choon-woo, CEO of Dongshin Motech.

According to Renault Samsung, a Twizy can drive a maximum 80 kilometers (50 miles) per charge and takes about three hours and 30 minutes to fully charge using a regular 220-volt socket.

The price of the two-seater car ranges from 13.3 million won ($11,022) to 14.3 million won depending on options, although this price can be dramatically decreased with subsidies from local governments. The one-seater Twizy Cargo, which instead has an enlarged trunk in the back, is priced at 14.8 million won.

While having all Twizy production in Busan is good news for Renault Samsung, it still remains unclear whether the tiny car will be able to do enough to save the carmaker from its recent downturn. Renault Samsung is cutting production and planning on human resources restructuring due to faltering sales. Its Busan factory is waiting to be allocated with new cars to produce as a deal to manufacture Nissan’s Rogue SUV is likely to end this year.