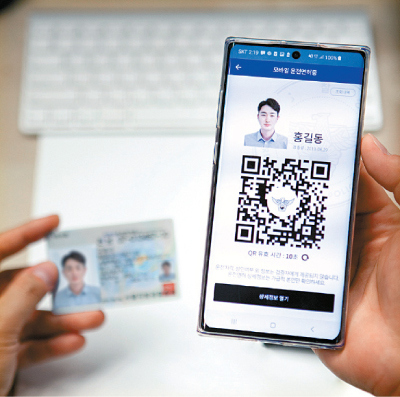 A sample image of a digital driver’s license issued through the mobile app Pass. [SK TELECOM]

According to SK Telecom, KT and LG U+, the three carriers and the police agency plan to issue a mobile-app-based digital driver’s license by the first quarter of next year.

The carriers will be issuing the license through an existing mobile app dubbed Pass, a mobile authentication service used by all three carriers under different brand names. Once users agree to have their digital license issued on the Pass app and register their physical license for verification, the app will provide a QR code or barcode for each license. The police agency and the Road Traffic Authority will take charge of the driver information verification process.

The attempt to digitize driver’s licenses has been made already in the United States and Australia, the carriers said.

The digital version can remove the need for drivers to carry their physical licenses. From the government side, they can notify drivers when they need to renew their licenses and also promote new traffic regulations through the mobile app.

To expand the use of digital licenses, the carriers plan to partner with shared mobility service providers like Socar so that mobility companies can more easily verify drivers actually using their services.

The carriers said digital licenses could prevent people from illegally registering licenses that do not belong to them.