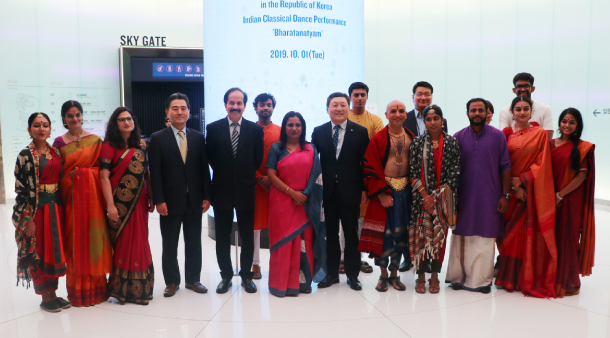 Ambassador of India to Korea, Sripriya Ranganathan, center, and performers of Bharatnatyam dance and Carnatic music, and members of district offices in Seoul celebrate the opening of the Sarang Festival at the Lotte World Tower in southern Seoul on Tuesday. [INDIAN EMBASSY IN KOREA]

The Embassy of India is hosting special performances on Bharatnatyam dance and Carnatic music, as well as Indian film and food festivals in October and November as part of the annual Sarang Festival that launched Wednesday.

“Sarang: the Festival of India in the Republic of Korea” is being held for the fifth time and is organized by the embassy and supported by India’s Ministry of Tourism.

“Sarang 2019 gains added significance, since it coincides with the global commemoration of the 150th birth anniversary of Mahatma Gandhi,” the Indian Embassy said in its statement Wednesday, the day of the anniversary. Sarang means colorful, diverse, peace and love, in several Indian languages, according to the embassy. It also means love in Korean.

Bharatnatyam performances will be held at the Indian Cultural Centre in central Seoul at 3 p.m. today, at the Busan Nurimaru APEC House at 7 p.m. Friday and at the National Gimhae Museum at 2 p.m. on Sunday. Additional performances will follow in Daegu, Gwangju, Buyeo County, South Chungcheong, and Nami Island in Gyeonggi.

Ticket information can be found on Interpark or on the embassy’s website.

Bharatanatyam is a classic dance form in India that tells stories of religious themes and ideas through intricate footwork and hand gestures, as well as expressive facial expressions.

Carnatic music, usually performed in small ensembles, consists of a vocalist and artists accompanying the vocalist with string and percussion instruments.

The festival this year will also include an Indian-Korean art exhibition showcasing work by five Korean and five Indian artists at the K&K Gallery in Busan. The exhibition opens on Friday and will be held through Oct. 10.

The Indian Food Festival in conjunction with the Sarang Festival will offer traditional and signature dishes from the Indian state of Rajasthan prepared by two chefs invited from India for the occasion, at the Millennium Hilton Seoul in central Seoul from Nov. 14 to 22.

A film festival will also begin from Oct. 16, with the inaugural screening to take place at 6:30 p.m. at the Korean Film Archive in Mapo District, western Seoul. Award-winning Indian films will be screened in four different Indian languages with Korean subtitles at the archive center, and additionally at the Busan Cinema Center and at the Asia Culture Center in Gwangju. All screenings will be free, according to the embassy.