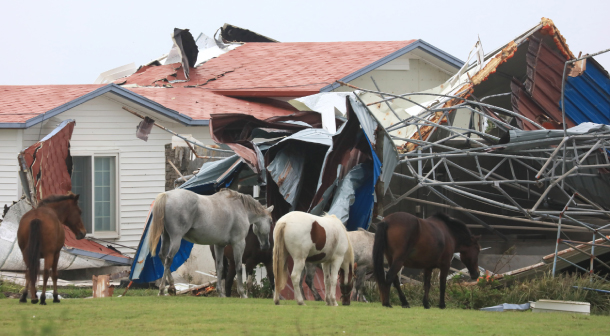 A warehouse on a livestock farm in Seongsan on Jeju Island lies destroyed by high winds brought by Typhoon Mitag on Wednesday. [YONHAP]

Typhoon Mitag was expected to make landfall in southwestern Korea on Wednesday evening, hours earlier than the previously predicted midnight, weather forecasters said, as the nation’s southern regions including Jeju Island have been put under heavy rain and high wind warnings.

The Korea Meteorological Administration (KMA) said Mitag, the season’s 18th typhoon and the seventh to affect the Korean Peninsula this year, was expected to land on the coast of the southwestern province of South Jeolla between 9 p.m. and 10 p.m. before bringing heavy rain and high winds to the southern regions, including Busan and Daegu, and exiting to the East Sea on Thursday morning.

The KMA previously said Mitag will make landfall on the southwestern coast around Wednesday midnight.

The typhoon has somewhat lost strength due to inflows of dry air from the west, the agency noted.

Mitag, a mid-strength typhoon, was moving north-northeast from waters 230 kilometers (143 miles) west-southwest of Seogwipo on Jeju Island at a speed of 30 kilometers per hour as of noon. Its central pressure was reported to be 985 hectopascals, with a maximum wind speed of 27 meters per second.

Mitag is likely to weaken to a small-scale storm, but heavy rain of 100 to 300 millimeters (3.9 to 11.8 inches) is expected across Jeju Island and the southern regions of the mainland.

Precipitation in some mountainous locations of Jeju and eastern coastal areas of Gangwon and North Gyeongsang could reach up to 600 millimeters, the KMA said.

The amount of rainfall in the central provinces of North and South Chungcheong is expected to reach 80 to 150 millimeters, while other areas of the nation, including Seoul, are likely to receive 30 to 80 millimeters of rainfall, it added.

Jeju Island has already sustained effects from the approaching typhoon - 309 flights have been canceled, more than 300 schools have been closed or had their hours shortened and at least six houses and warehouses have been wholly or partially destroyed.

Three Jeju residents suffered light injuries, while 25 people in eight households were evacuated to an emergency shelter. As of 10 a.m., precipitation had reached 148 millimeters in the city of Jeju, 130.9 millimeters in Seogwipo and 240.5 millimeters on Mount Halla. Strong winds reaching up to 29.3 meters per second were also reported in the island’s mountains.

“In strength, Mitag will be similar to or weaker than the season’s 17th typhoon, Tapah, which passed over the sea between Korea and Japan. As Mitag will make landfall, however, its impact will likely be much stronger and more extensive,” a KMA official said.