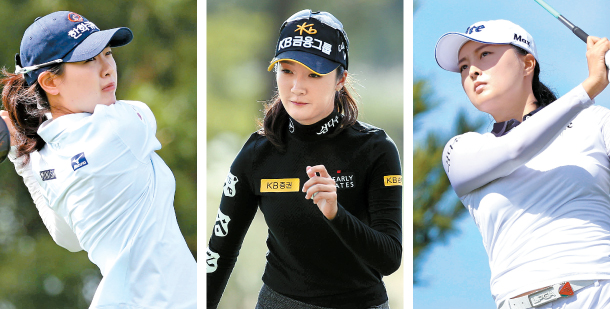 From left: Lee Jung-min, Oh Ji-hyun and Ko Jin-young during the first round of KLPGA inaugural Hana Financial Group Championship at Sky 72 Golf & Resort’s Ocean Course in Incheon on Thursday. Along with the three golfers, Kim Ji-yeong is also tied for the lead at four under par. [YONHAP]

The KLPGA Tour’s inaugural Hana Financial Group Championship kicked off with a four-way tie for the lead at the Sky 72 Golf & Resort’s Ocean Course in Incheon on Thursday.

After the first round, four players - Lee Jung-min, Oh Ji-hyun, Ko Jin-young and Kim Ji-yeong - are tied for the lead at four under par.

Of the four, Lee was the first player to finish her round, with five birdies and a bogey. Lee finished her first nine holes at even par with a birdie on the par-5 fifth and a bogey on the par-3 eighth.

Then, she started to pick things up in the back nine. Having started with back-to-back birdies on the par-4 10th and the 11th, Lee added two more birdies in the remaining holes to finish her round at four under par, 68.

Oh quickly followed. Also with five birdies and a bogey, Oh, who started from the 10th hole, got off to a quick start with back-to-back birdies on the par-4 10th and the 11th hole. Although she made a bogey on the next hole, she quickly redeemed it with another birdie on the par-5 13th.

She quickly made her way up to four under par by adding two more birdies on the par-5 18th and the par-3 third. Then, as she made pars on the next six holes, Oh tied for the lead.

Among the four players, Ko’s round to tie for the lead was the most dramatic. Ko, who started her first round on the first hole, headed into the final hole one shot behind the leaders, at three under par. Then, on the par-5 18th, Ko made her birdie putt to tie the lead and to finish her first round.

Ko, who now plays on the LPGA Tour, has been receiving the most attention as she entered this weekend’s tournament as the No. 1 ranked player in the world ranking.