Hwang Hee-chan of FC Salzburg scored his sixth goal of the season during a UEFA Champions League Group E match against Liverpool at Anfield in Liverpool, England, on Wednesday. 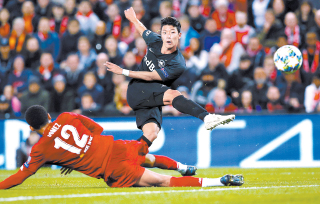 With Salzburg losing 0-3, Hwang finally broke the silence by scoring the club’s first goal of the match in the 39th minute, assisted by Enock Mwepu.

Hwang continued his stride by assisting Salzburg’s second goal in the 56th minute by Takumi Minamino. Salzburg finally tied the score as Erling Braut Haaland scored the third goal in the 60th minute, assisted by Minamino.

But Liverpool’s Mohamed Salah saved the team by scoring his second goal of the match in the 69th minute to help the club bring back their lead. Due to this, Salzburg lost the match 3-4.

Despite the loss, Hwang’s goal made headlines as he outsmarted Liverpool’s defender Virgil van Dijk, the 2019 UEFA Men’s Player of the Year.

Although Salzburg lost to Liverpool, it was a well-fought match. According to the UEFA ranking, Liverpool is currently the eighth-best team in Europe while Salzburg is 26th. Liverpool is the reigning Champions League champion.

With the loss, Salzburg is now ranked third in Group E with one win and one loss. Their record is tied with Liverpool, but as Liverpool is ahead in goal difference, Salzburg moved down a spot to third.

In Group E, Napoli leads with a win and a draw.

With a goal and an assist, Hwang has improved his seasonal statistics to six goals and 10 assists. Following the match, Hwang was given a score of 8.2 by whoscored.com, a football statistics website, the highest among the Salzburg players.

Despite the loss, Hwang’s performance against Liverpool was impressive enough to make headlines. UEFA.com, the competition’s official website, said; “Erling Braut Haaland dominated the headlines in the build-up to Liverpool vs. Salzburg but it was another striker who stole the show as the visitors almost pulled off a miraculous comeback at Anfield.”

“Absolutely crazy, he was brilliant today,” Haaland was quoted as saying on UEFA.com. “He’s so important to the team.”

Haaland has been Salzburg’s key striker this season, scoring 18 goals, but Hwang has also played a crucial role in Haaland’s scoring streak. Of Hwang’s 10 assists this season, six of them were for Haaland.

Behind the two’s performance, Hwang told UEFA.com after the match, “we obviously understand each other very well.”

Hwang started his youth career with Pohang Steelers, but rather than continuing his senior career at the club, he joined Salzburg in 2014. Having played in no matches for Salzburg during the 2014-15 season, Hwang joined FC Liefering on a loan for two seasons, from 2014-15 to 2015-16.

With Hamburger SV, Hwang had one of his worst seasons, scoring only two goals in 21 matches. This time, he’s playing a significant role for Salzburg, although the season has only just started.

Salzburg will play their next UEFA Champions League Group E match against Napoli at home at Red Bull Arena Salzburg in Austria on Oct. 23.

Along with Hwang, Valencia CF’s Lee Kang-in also made an appearance during the club’s UEFA Champions League Group H match against Ajax at Mestalla Stadium in Spain on Wednesday. Lee was substituted into the match in the 57th minute but Valencia lost 0-3.

With a loss, Valencia is ranked second in Group H with one win and one loss.