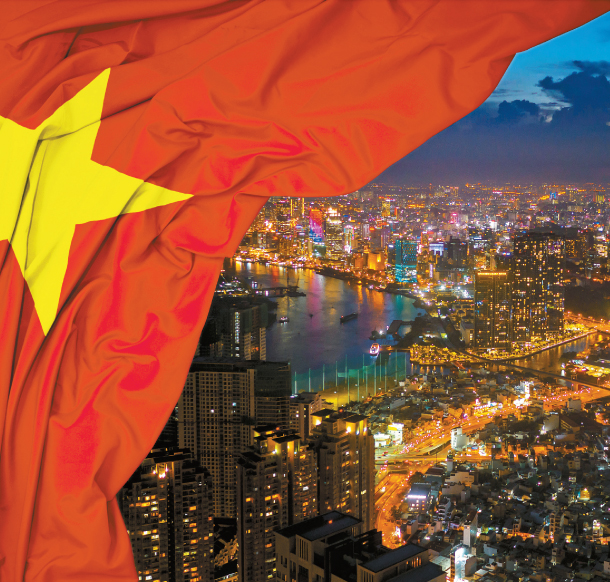 A view of Ho Chi Minh city in Vietnam. Vietnam has been enjoying a 6 to 7 percent growth in recent years. [UPI/YONHAP]

Geographically, Vietnam isn’t the most obvious economic partner for Korea. It takes nearly five hours to fly from Incheon International Airport to Hanoi, so you could hardly call the two countries neighbors.

Distance isn’t the only obstacle between the two nations - for many older Koreans, Vietnam is still the country that forced Korea’s American allies to leave a decades-long war in 1975.

Socially as well, some Koreans still hold onto outdated stereotypes, picturing Vietnam as a poverty-stricken country whose women end up marrying old Korean bachelors and moving here for uncertain, and often tragic, lives.

In reality, Vietnam today is a rapidly developing country with huge metropolitan cities that are major hubs for industry and commerce. Korean businesses flock to Vietnam, using the well-placed country as a door to Southeast Asia. 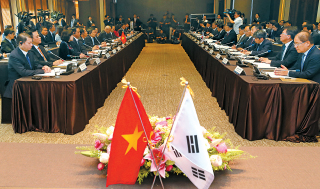 But what’s more surprising is that Vietnam is now Korea’s third-largest single-country export market after China and the United States.

Currently, China tops the ranks as it accounts for 25 percent of Korea’s exports while the United States accounts for 12 percent. Vietnam trails behind with 9 percent.

Exports to Japan, which was once the No. 1 Korean export market, are now half of those to Vietnam.

Vietnam on the rise

Korea is the No. 1 country investing in Vietnam. The investment that Korean companies have made in the 25 years from 1992, when relations were normalized, to 2017 total $50 billion.

The investment size alone shows the expectations of Korean companies on the Vietnamese market.

Some experts believe that Vietnam could even surpass the United States as Korea’s second-largest export market and even rival China in the future.

The biggest obstacle is whether Vietnam’s current economic expansion will continue.

Two decades have gone by since Vietnam opened its market after the fall of the Soviet Union. Since then, Vietnam has grown into a country that the Swiss investment bank UBS named as the most attractive Asian market, arguing that Vietnam will grow into one of the top five emerging markets for logistics.

There is still room for Vietnam to grow, as while Vietnam has mended its differences with the United States and the two countries have been increasing in economic exchanges, the United States has yet to be aggressive in its investment.

While Vietnam’s GNI per capita is still far below Korea’s $30,000, the Southeast Asian country holds the potential to grow at a much faster rate than Korea did when it succeeded in becoming one of the leading economies in Asia.

With China’s economy saturated, many foreign companies including Korean firms are shrinking their dependency on China, creating opportunities for Vietnam.

Korean companies are riding the wave of Vietnam’s rapid development.

While Samsung Electronics has been making adjustments to its investments in China, it has also been expanding investment in Vietnam.

The Vietnamese government even created an exclusive customs system to welcome Samsung’s investment, and when Samsung recruits new employees, the lines of applicants go out the door.

The changing global value chain as a result of the ongoing trade war between the United States and China is also speeding up investment in Vietnam.

With American companies relocating plants from China to Vietnam, hiring in Vietnam has been rising to meet the growing number of orders.

Additionally, with the trade war between the two power houses continuing, even foreign capital is moving out of China and into Vietnam.

Historically, Vietnam and China have fought numerous battles, and even today the two are locked in conflict over the South China Sea.

The difficult history is also one reason why Vietnam is so keen to welcome foreign investments relocating from China.

Korean companies expanding into the Vietnamese market are also making improving cultural relations between the two countries, most noticeable in the growing number of multiethnic marriages.

And unlike in the past when Vietnamese women were married off to older - and often not very wealthy - Korean bachelors, today Vietnamese women are marrying young Korean men that have moved to the country for work.

According to a Korean statistics agency, not only has the age gap between spouses narrowed, but many couples are now living in the greater Seoul area with better jobs and education.

But one of the biggest changes in recent years compared to the past is that the number of Koreans choosing to relocate to Vietnam to live with their spouse has shot up significantly.

Vietnamese women who were born in the 90s now have much better opportunities to work for foreign companies - including Korean companies - since Vietnam has opened its market.

Vietnam as a production hub

But the introduction of capitalism hasn’t always churned out positive results.

With the massive inflow of foreign investment that has contributed to Vietnam’s rapid growth, the widening gap between the rich and poor has grown.

However, Vietnam is now at a juncture where it will need to make changes.

While the Vietnamese economy has grown rapidly on the back of massive foreign investment, it now has to have its own independent growth engine to move forward.

As of yet, it is difficult to say if Vietnam has succeeded in securing its own growth engine.

In the case of China, the country has succeeded in developing its own technologies that not only threaten competitions like Korea, but also other major advanced economies.

In this sense, Vietnam could increase its role as the hub of Korean production that can also help Vietnam in developing its own technologies.

Korean companies today are continuing to increase cooperation and investment in Vietnam.

Vietnam’s practical willingness to concentrate on development extends to foreign relations and historic grievances. While the Korean government has expressed its willingness to apologize for the conduct of Korean soldiers during the Korean War, Vietnam said it is more focused on future relations.