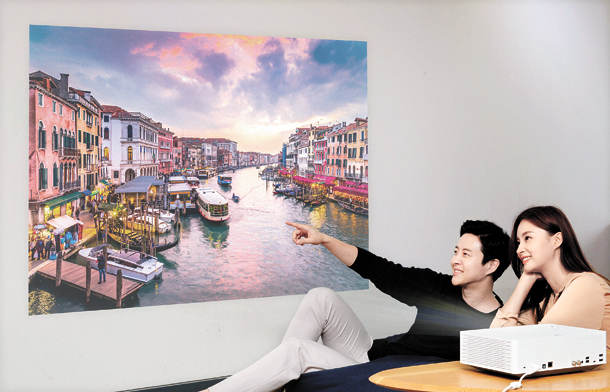 The electronics firm on Thursday said it released a new CineBeam projector with 4K resolution today in Korea. The release is LG’s latest product targeting the premium projector market. It already has two 4K CineBeam models.

Unlike LED projectors, which use red, green and blue light, the 4K model has an additional light source that is able to deliver brighter and clearer colors, according to LG.

LG said the LED light source for the projector will run for 30,000 hours. It has a brightness of up to 1,500 ANSI lumens, a measure of light approved by the American National Standards Institute.

The projector has a webOS 4.5 platform and comes with Google’s artificial intelligence service Google Assistant, which allows viewers to watch content without having to connect it to a separate device. Users can also use verbal commands to access content from their smartphone or laptop through a Wi-Fi connection.

“LG will continue to lead the projector market in Korea with LG CineBeam projectors, which are optimized for the lifestyle of consumers that wish to enjoy home cinema,” said a spokesperson for LG Electronics in a statement.