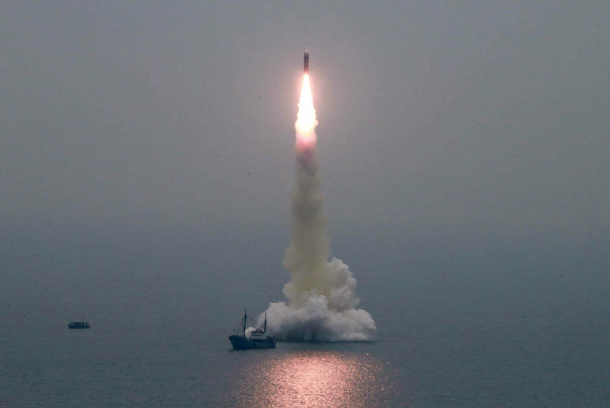 A Pukguksong-3 SLBM is seen fired from North Korea’s eastern coast on Wednesday in a photo released by the Rodong Sinmun on Thursday. South Korean military officials believe the ship located closest to the missile was used to tow a submersible barge that was topped with a launch pad from which the SLBM was launched. [RODONG SINMUN]

North Korea’s state-controlled media outlets announced Thursday that the missile it tested a day before was a new type of submarine-launched ballistic missile (SLBM) called Pukguksong-3, boasting it had successfully ushered “a new phase in containing the outside forces’ threat” to the regime.

But conspicuously missing from the 11 photos that ran on the front and second pages of the North’s official newspaper, Rodong Sinmun, were any traces of its leader Kim Jong-un - unlike the coverage of the regime’s 10 earlier missile tests throughout this year when he was shown monitoring the launch from a distance.

The Rodong Sinmun article that went with the photos on Thursday said Kim, on behalf of the ruling Workers’ Party’s Central Committee, sent his “warm congratulations” to the national defense scientific research units involved in the latest test-firing.

Yang Moo-jin, a professor of inter-Korean relations at the University of North Korean Studies in Seoul, said it appeared Kim was trying not to provoke U.S. President Donald Trump as Pyongyang and Washington are soon expected to enter working-level talks on denuclearization.

By carrying out the test just three days before that meeting, said Yang, Pyongyang seemed to have wanted to convey to Washington that the North is capable of enhancing its nuclear and missile technology, as a means to boost its negotiation power.

“The successful new-type SLBM test-firing comes to be of great significance as it ushered in a new phase in containing the outside forces’ threat to the DPRK and further bolstering its military muscle for self-defence,” an English version of the Rodong Sinmun article read, referring to the North by the acronym for its official name, the Democratic People’s Republic of Korea.

The article said the missile was fired in a “vertical mode,” implying it could’ve traveled farther had it been flown from a normal angle.

North Korean media outlets did not report on the missile’s flight trajectory, but the South’s Joint Chiefs of Staff (JCS) said Wednesday that the projectile was launched at 7:11 a.m. from the eastern coast of Wonsan, Kangwon Province, and flew 450 kilometers (280 miles) eastward, reaching a peak altitude of 910 kilometers before splashing into the East Sea.

The JCS said Wednesday it appeared to have been an SLBM, but after analyzing the photos from Thursday, local military authorities said it seemed Pyongyang didn’t actually fire the missile from a submarine.

One of the 11 photos published showed a ship near the place where the missile was launched, which South Korean military officials believe was used to tow a submersible barge that was topped with a launch pad, from which the SLBM was launched.

Kim Dong-yub, a defense analyst at Kyungnam University’s Institute for Far Eastern Studies in Seoul, said Pyongyang could soon test-fire Pukguksong-3 from a submarine based on the country’s history with testing SLBMs.