Kimchi-making festival to focus on foreigners

Kimchi-making festival to focus on foreigners

Thousands of participants make kimchi together at Seoul Plaza in central Seoul during the Seoul Kimchi Festival in November 2018. The annual festival will be held from Nov. 1 to 3 this year at the plaza and is expected to gather around 5,000 people, according to the Seoul city government. [SEOUL METROPOLITAN GOVERNMENT]

For three days at the start of November, the city government of Seoul is hosting classes on kimchi making especially for foreigners at Seoul Plaza.

“Every day from Nov. 1 to Nov. 3, all foreign residents and visitors to Seoul are welcome to attend the Seoul Kimchi Festival to try their hand at making kimchi,” the Seoul Metropolitan Government said in a statement.

The annual Seoul Kimchi Festival, held in Seoul Plaza in central Seoul from Nov. 1 to 3, this year will hold specific classes for foreigners that will be hosted in English at an indoor classroom installed at the plaza at 12 p.m., 2 p.m. and at 4 p.m. on all days of the festival.

Gathering in groups of two to three per table, the participants will learn about the history and culture of kimchi making in Korea and follow the directions from Choi to make their own kimchi, which they will be able to take home after the event.

Registration for the classes can be made at booking.naver.com/booking/12/bizes/265154/items/3175697 or by accessing seoulkimchifestival.kr. Registration requires a Naver account, and non-Korean speakers will be able to access information in English after they log in. Registration for a group of more than four people can be made by calling the Seoul Kimchi Festival at 02-337-9894.

“The Seoul Kimchi Festival is being hosted for the sixth time this year and will share the tradition of the making and sharing of kimchi, which has been inscribed as an intangible cultural heritage by Unesco,” said Yoo Yeon-sik, head of the culture bureau of the Seoul Metropolitan Government. 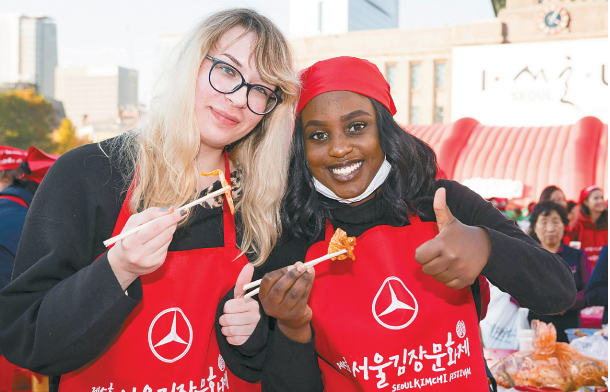 Participants of the Seoul Kimchi Festival pose together while tasting the kimchi that they made at last year’s festival in November 2018. [SEOUL METROPOLITAN GOVERNMENT]

It has been a tradition in Korea for households to make kimchi in November. Koreans call this kimjang (kimchi making) season.

Kimchi can be made at any time of the year as long as cabbage and other ingredients are available, but traditionally, it was done in late November when the ingredients were at their best. Since people wanted to produce kimchi in bulk when all the ingredients were in season, families and neighbors would get together and work for days to make enough to store for the following year.

But with the growing number of smaller-sized and one-person households, such large-size gatherings of family members for the annual kimjang season is no longer a common feature in many parts of Korea, especially in urban regions.

The population trend has been taken into account by even the kimchi-making festival.

“Nowadays we have a lot of one-person households, and it can be a burden to make kimchi alone,” the city government said in its statement. “So we prepared a program for single-person households - they can come and make kimchi with other people, following the recipes of expert kimchi-makers and take home some 5 kilograms [11 pounds] of kimchi that they made.”

The program costs 30,000 won and participants have the option to ship home the kimchi they made, at an additional cost.

There will also be special lectures open for everyone that share kimchi recipes and tips.

Hosted in an indoor classroom installed at the plaza during the festival, the lectures will be held three times a day from Nov. 1 to 3.

“You can pick and choose the lectures, and they may include one about seafood radish kimchi by chef Lee Ha-yeon; the classic cabbage kimchi by chefs Yoo Jeong-im, Kim Soon-ja or Yoon Mi-wol; or a lecture on South Jeolla’s Naju-style kimchi,” the city government said in its statement. “At the end of each class, the participants will be able to taste the kimchi that these famous chefs have made.”

On Mugyo-ro, located on the east side of the City Hall building, there will also be food trucks selling various street foods made with kimchi and a food court showcasing creative dishes made with kimchi by students of the culinary school of Baewha Women’s University in central Seoul. The students will be using recipes developed by the World Institute of Kimchi in Gwangju.

A kimchi market will also be open on the western end of Seoul Plaza throughout the festival.

The festival also hopes to get dads involved as well.

“There will be kimchi-making classes held for children to attend with their fathers,” the city government said in its statement. “The classes will be held twice a day, and the children will learn with their fathers how the kimchi that they eat everyday is actually made.”

Some of the kimchi made at the festival will be shared with low-income families, the city government said.

“The festival this year will not only be about sharing the traditions of making kimchi together, but also physically sharing the kimchi we make together with our neighbors,” Yoo explained.

Around 50 tons of kimchi made together during the festival will be shared with 20,000 households throughout Seoul.

“We especially invite people to apply in groups, together with family members or even colleagues,” the city government said in its statement. “The occasion can make a meaningful company outing.”