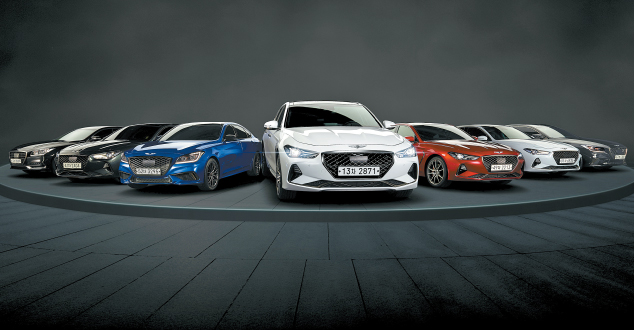 Hyundai Motor’s luxury brand Genesis has extended operations of its monthly subscription service until May next year. Subscribers to the service can drive Genesis vehicles, pictured, for 1.49 million won (＄1,240) per month. [HYUNDAI MOTOR]

Hyundai Motor’s luxury brand Genesis will extend operations of its monthly car subscription service until May next year, the brand said Friday.

Genesis Spectrum, launched as a 10-month test service in December, was the first car subscription service offered in Korea by an automaker.

Under the program, subscribers can drive Genesis vehicles including the G70, G80 and G80 Sport for 1.49 million won per month ($1,240). Cars can be switched up to twice per month. As subscribers do not own the car, they are free from paying taxes, insurance fees and maintenance costs.

Genesis said it decided to run its test service for a longer term, as this sales model received a positive response from local customers. According to the carmaker, the program has attracted an accumulated 1,300 subscribers since its launch, and roughly 360 customers are in line to start subscriptions.

The program earned popularity largely thanks to the fact that customers can experience cars with hefty price tags from the luxe brand and they are not bound to pay any deposits or penalties for early termination, according to the automaker.

While subscription services for cars have been introduced globally by luxury car brands like Porsche and Cadillac, the concept is still new in Korea.

Korea’s largest auto group by sales, Hyundai Motor Group, however, is actively trying out the model through test services as it hopes to transition into a mobility service company rather than staying a traditional automaker.

After Genesis launched the service in December, Hyundai Motor soon followed by launching a similar service dubbed Hyundai Selection in April. The pool of cars offered are Hyundai Motor’s Sonata, Tucson and Veloster, and the monthly fee is cheaper at 720,000 won per month.