A new adventure for ‘Maleficent’: Follow-up to the 2014 hit stars Angelina Jolie, Elle Fanning and some new faces

A new adventure for ‘Maleficent’: Follow-up to the 2014 hit stars Angelina Jolie, Elle Fanning and some new faces 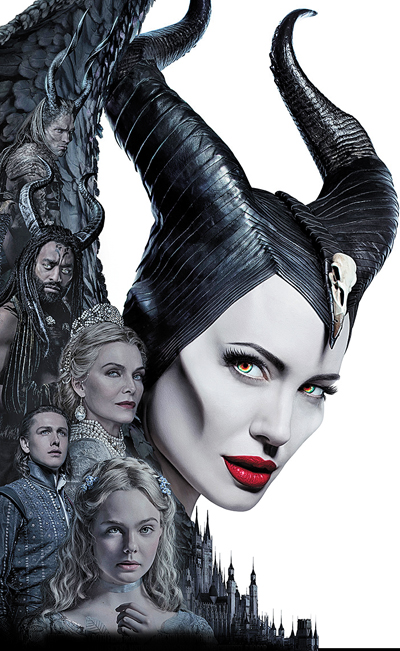 The all-powerful fairy Maleficent has returned to the Moors, the magical forest kingdom that she once ruled. Although she is still unaccustomed to showing off her feelings, her love for Aurora is as fierce as ever, stronger and thicker than blood.

The first “Maleficent” film earned praise from fans for bringing the tale of “Sleeping Beauty” to life and presenting Maleficent’s perspective: She had to cast a sleeping spell on Aurora before she had a change of heart due to her love for the princess.

The film went on to become one of the most successful live-action adaptations of a Disney animated film, grossing over $750 million worldwide, thanks to Angelina Jolie’s exceptional performance.

Disney announced in June 2014 that there would be a sequel to the film titled “Maleficent: Mistress of Evil,” with the actors reprising their roles and a new antagonist, much to the excitement of fans.

In the second film, the story takes another complicated twist as Aurora, now 21, is preparing to marry Prince Phillip of the Ulstead Kingdom.

Unlike the prince’s father, King John, Queen Ingrith (played by Michelle Pfeiffer) despises the unknown fantastical creatures of the Moors and the fairy Maleficent. Although she doesn’t approve of them, she cunningly welcomes them into her family, with the ultimate goal of starting a war to divide humans and fairies forever.

Even though they play enemies in the film, Jolie admired Pfeiffer and her character so much that it was “hard not to smile.” Instead of describing Queen Ingrith as evil, however, the actor thought that the Queen is a portrayal of “a strong woman.”

The actor also talked about her special connection to the actor Elle Fanning (who reprises her role as Aurora). 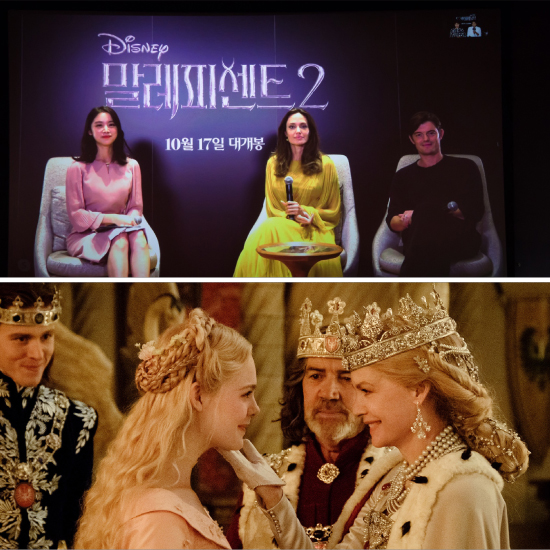 Top, from left, Hye Rim, former member of the girl group Wonder Girls and host of the event, with actors Angelina Jolie and Sam Riley, who answer questions from the press on Friday. In a scene from the film at above, Queen Ingrith, far right, welcomes Princess Aurora before her wedding to Prince Phillip. [WALT DISNEY COMPANY KOREA]

“[Elle] really is, to me, Aurora,” Jolie said. “Her strength is in her softness, kindness, sweetness, her love, her desire to have a husband and children and she loves to hug and smile, and all of these things these days are associated with weaker women because they [people] think of strength as being a certain kind of tough. But really, I believe the strongest person in the film is Aurora and it’s is her femininity and that’s Elle. She has a huge career, but she’s humble and sweet - there’s heart in this business.”

“The appeal of Diaval is honesty, his loyalty to Maleficent and his affection towards Aurora,” Riley said.

“He immediately treats her as his own in the first movie, and it’s a fascinating relationship that he has with Maleficent. He could, in theory, fly off somewhere into the Moors and make a nest somewhere, but something keeps him there by Maleficent’s side - it’s a unquestioning loyalty.”

Both actors are parents themselves, which they say definitely impacted their performances in the film. Jolie’s eldest son, Maddox Jolie-Pitt, entered Yonsei University in Seoul this fall.

“A child leaving a nest, as they say, is something - it was on my mind making the film and yet I have to say I’m so happy he chose to go to school in Korea, and I know he’s having a wonderful experience,” Jolie added.

“You’re nervous for your child, but when you believe he’s in the right place, you’re happy, and I’m very, very grateful to everyone in Korea who’s making him feel at home, and [I’m so] happy he’s getting the education [that he needs].”

Riley, on the other hand, became a father since the release of the first film five years ago.

“I think the love you experience as a parent is indescribable, but it has also formed every role I [have] played [since],” Riley said. “I think it makes you vulnerable and sensitive in a way that you can’t imagine until you become a parent. So it meant a lot to me watching Aurora in the scene at the end.”

Jolie had her own reason behind returning to the film, besides the good messages in the movie.

“I also always wondered what Maleficent was,” Jolie said. “Where did she come from? And so the idea that she was part of a tribe that was of the world and we could introduce them to the audience, that was exciting for me.”

If the first film was about breaking away from stereotypes, the second film, Jolie says, is about embracing diversity.

“[The film] felt like a dream of how the world could be - there was strength, equality and celebration of diversity in each of us, and I love that message,” she said. “I’m excited for the little children. [They] may not understand what they love when they see this movie, but if they love the end, then they’re taking a step forward to embracing and respecting that diversity and others.”

The fantasy movie is slated to premiere in local theaters on Oct. 17.