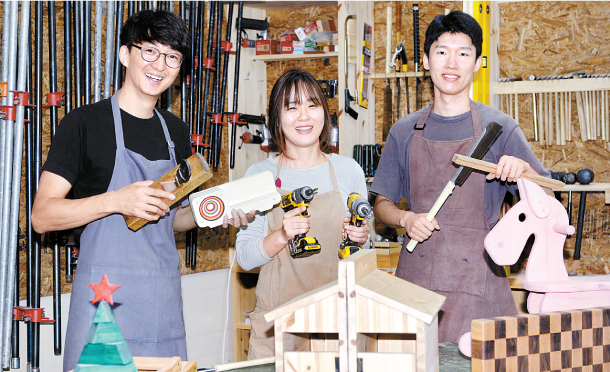 Carpenters Oh Se-hyeon and Cha Hyeon-ju, who established a woodworking shop in Chilgok County, North Gyeongsang, pose with a mailbox and other items they made on Sept. 26. [KIM SUNG-TAE]

Oh Se-hyeon took to the stage at the Eco Training Playground located in Suncheonman Bay National Garden in Suncheon, South Jeolla, on Sept. 25 to tell his story.

The 37-year-old qualified as a carpenter after giving up his job of eight years at an IT company and then opened his own woodworking shop.

Oh spoke about his experience at the National Balanced Development Expo, organized by the Presidential Committee for Balanced National Development and the Ministry of Trade, Industry and Energy which ran from Sept. 25 to Sept. 27.

Before establishing his own shop, he completed a 10-month course to be a carpenter. “I stumbled upon an advertisement for youth carpenters one day and was attracted by it,” he said. “Finally, I established a woodworking shop in Chilgok County, North Gyeongsang, with four other friends.”

The average age of the five who established the shop is 36 years old. They usually make furniture, such as tables and chairs or other household items. They are currently being recognized throughout the country and have even received orders for benches and cabinets from Daegu.

They are also active in community activities. In connection with town centers, kindergartens and facilities for people with disabilities, they provide opportunities for people to experience carpentry. Also, they plan to establish an education program for people who want to enjoy carpentry as a hobby.

“Making new items as a carpenter is a lot more fun than going to work in a company,” Oh said. “It is also meaningful that our talents link us with the local community.”

Another case of regional innovation which was introduced in the National Balanced Development Expo was Empty House Bank, a business for urban farming.

The Empty House Bank, established by CEO Choi Hwan, grows pine mushrooms and shiitake mushrooms using semi-basement rooms that are notorious for their damp conditions. It leased 20 rental houses in Yonghyeon-dong, Incheon, for free, for the urban farming project.
Michuhol District in Incheon has about 1,000 semi-basement rooms. However, the rooms are mostly empty due to low demand.
“During talks with farmers, I realized that humidity of semi-basement rooms is good for growing mushrooms,” Choi said. “Also, the logistic costs were cheap due to their location.”

Other cases of regional innovation include Panasia, a company that specializes in the marine equipment industry which increased its orders by overcoming environmental regulations with new technology development, and EuBiologics, a company that developed the regional economy in Chuncheon, Gangwon, with the commercialization of a cholera vaccine.

Local governments’ exhibitions were also eye-catching. The city of Suncheon introduced a piece of artwork made from waste telephone poles which looks like a hooded crane, the animal representative of the region, while Daejeon introduced a drone.

Since 2004, the Presidential Committee for Balanced National Development has been held annually in major cities across Korea. This year, it consisted of an exhibition for sharing results from innovation as well as a forum for experts from about 100 research institutes and academics.

Alberto Mondi, a television personality from Italy, gave a lecture on the start-up company he launched called Element, which makes soap with natural resources. He also signed a contract with the social start-up Donggubat, which offers job opportunities to people with developmental disabilities. He also works with Dohands Corporation, a logistics company, which hires homeless people.

“At this year’s fair, about 1,000 innovators gathered together and shared their cases of innovation,” Song Jae-ho, chairman of Presidential Committee for Balanced National Development, said. “Based on these outcomes, the government will construct a community-led, self-contained basis for growth focusing on people, spaces and industry.”