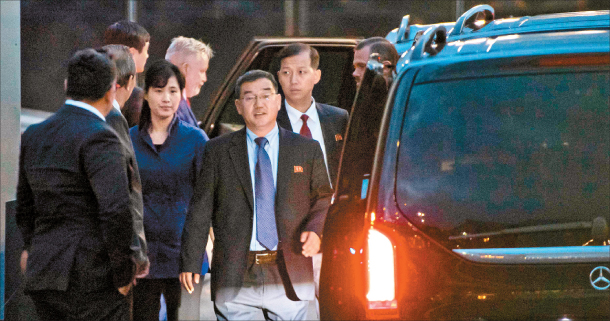 Members of the North Korean delegation arrive at the Stockholm Arlanda Airport in Sweden Thursday evening ahead of the resumption of working-level talks with the United States. [AFP/YONHAP]

U.S. and North Korean negotiators were set to hold low-level denuclearization talks in Sweden over the weekend, with both sides signaling cautious optimism despite Pyongyang’s testing of a new submarine-launched ballistic missile (SLBM) on Wednesday.

This marks the first official resumption of denuclearization negotiations in some 220 days since the second summit between North Korean leader Kim Jong-un and U.S. President Donald Trump ended abruptly without a deal in Hanoi, Vietnam, on Feb. 28.

Kim Myong-gil, North Korea’s new top nuclear negotiator, and his delegation arrived at Stockholm Arlanda Airport around 5:40 p.m. Thursday from Beijing. Kim’s delegation was greeted by Swedish officials in the V.I.P. hall for around half an hour. The team left the airport through a V.I.P. exit, avoiding reporters. Black BMW SUVs provided by the Swedish government were spotted parked outside the airport awaiting the delegation and were used to transport it to the North Korean Embassy.

The two sides were scheduled to have preliminary contact Friday before holding working-level talks on Saturday.

However, the exact venue, participants and details of the talks were left ambiguous by both sides.

Washington has been exercising caution and revealing little ahead of the talks.

Stephen Biegun, the U.S. special representative for North Korea, made congratulatory remarks at a National Foundation Day ceremony at the South Korean Embassy in Washington Wednesday, but did not specifically refer to the resumption of dialogue with Pyongyang. The U.S. State Department did not announce any travel plans for Biegun ahead of the talks.

Morgan Ortagus, the U.S. State Department spokesperson, on Tuesday only confirmed that the two countries’ officials “plan to meet within the next week.”

U.S. President Donald Trump, when asked by reporters about North Korea’s testing of a new SLBM Wednesday, also showed restraint in his remarks.

Without making specific mention of the SLBMs, Trump said in Washington Thursday, “They want to talk, and we’ll be talking to them soon. We’ll see.”

It is unclear if the two sides will be able to a compromise on the scope of denuclearization needed in order for some sanctions relief and security guarantees for the North. Pyongyang has over the past month been demanding a “new calculation method” from Washington, including through an address by Kim Song, the North Korean ambassador to the United Nations, at the UN General Assembly earlier this week.

Kim Myong-gil, who was confirmed as Pyongyang’s top negotiator for the nuclear talks, who previously served as the North Korean ambassador to Vietnam, told reporters at Beijing Capital International Airport Thursday before flying to Sweden, “As the U.S. side sent a new signal, I bear high expectations and optimism.”

In Hanoi, Washington demanded that Pyongyang take measures beyond the dismantlement of its Yongbyon nuclear complex and favored a so-called big deal. North Korea favored a more step-by-step process enabling partial sanctions relief along the way.

North Korean leader Kim and Trump held an impromptu meeting in the demilitarized zone at the inter-Korean border on June 30, agreeing to continue working-level talks soon.

However, the talks were delayed by joint military drills by Seoul and Washington in August and Pyongyang’s launch of short-range missiles. North Korean First Vice Foreign Minister Choe Son-hui in a statement on Tuesday finally announced the two sides agreed to have preliminary contact on Friday and hold working-level negotiations Saturday.

North Korean state media reported Thursday that it successfully launched Wednesday a new type of SLBM called Pukguksong-3, but leader Kim Jong-un was notably missing from observing the testing unlike similar occasions in the past.

Since the Hanoi summit, Trump last month fired his U.S. national security adviser, John Bolton, openly criticizing Bolton’s hard-line approach toward denuclearization. Bolton favored the Libyan model, urging the North to unilaterally dismantle its weapons of mass destruction before receiving any concession in return, as Libya did in 2003. Pyongyang has balked at the model, which it sees as leading to the downfall of former Libyan leader Muammar Gaddafi, who was killed in 2011. Biegun, in turn, has favored a more flexible approach.

Preliminary discussions Friday were seen as a way for Pyongyang to figure out if Washington was bringing a new approach to the table before heading into formal talks.

The preliminary talks were expected to take place between the two countries’ deputy nuclear negotiators, Mark Lambert, a former U.S. acting deputy assistant secretary for East Asian and Pacific affairs, and Kwon Jong-gun, a former director-general of the North Korean Foreign Ministry’s North America Department. But Biegun and Kim Myong-gil could also meet in this session - if Biegun did indeed travel to Stockholm.

There was also the possibility that working-level talks could extend more than a day. It could also be a venue to discuss arranging a third North-U.S. summit. North Korean leader Kim proposed such a meeting in a letter to Trump in August.

Sweden as a neutral third country with diplomatic ties to both Pyongyang and Washington has been a mediator in past talks. The Swedish government previously hosted secretive working-level talks between Biegun and his North Korean counterpart at the time, Vice Foreign Minister Choe, from Jan. 19 to 22 in a secluded resort in Stockholm, which helped set up the second North-U.S. summit in Hanoi in February. The Stockholm International Peace Research Institute and the Swedish Foreign Ministry helped arrange the meeting which also included South Korean diplomats.