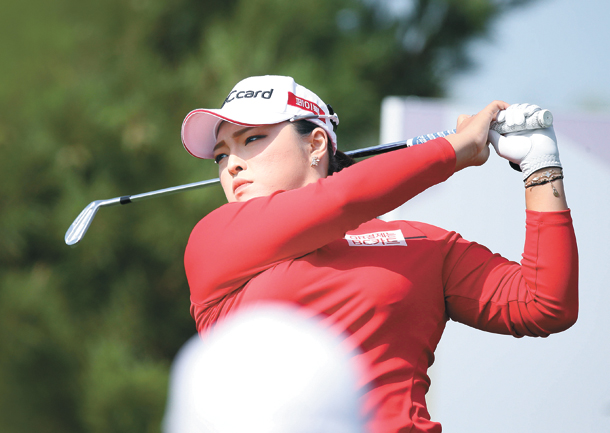 Jang Ha-na watches her shot during the final round of KLPGA’s inaugural Hana Financial Group Championship at the Sky 72 Golf & Resort Ocean Course in Incheon on Sunday. [YONHAP]

Jang, who started the final round one shot behind the leader, got off to a quick start by making a birdie on the par-4 first. However, it was Lee Da-yeon who first took the lead as she started her round with three straight birdies.

Jang finally took the sole lead on the par-3 eighth. On the hole, Jang made a birdie while Lee made a double-bogey to take a one-shot lead.

But Jang’s lead came to a quick end as Lee once again made back-to-back birdies on the par-4 10th and 11th holes to regain her lead by a shot.

Jang dropped further away from a win when she made a bogey on the par-3 12th, as it allowed Lee to extend her lead by two. Shortly after, Jang fell three shots behind Lee as Lee made a birdie on the par-4 13th.

With a three-shot lead, it seemed as if Lee was easily going to pick up a win, but one missed shot on the par-4 16th changed everything. Lee hit her second shot into the bunker and she had to take a one-shot penalty for an unplayable because the ball was plugged. Taking a drop within the bunker, Lee hit the green in her fourth shot and with a two-putt, she made her second double-bogey of the round.

With Jang and overnight-leader Kim Ji-yeong making par on that hole, they were only one shot behind Lee with two more holes remaining to play. As both Jang and Lee made par on the par-3 17th, it all came down to the final hole, the par-5 18th.

Kim fell out of contention as she made bogey on the par-3 17th. 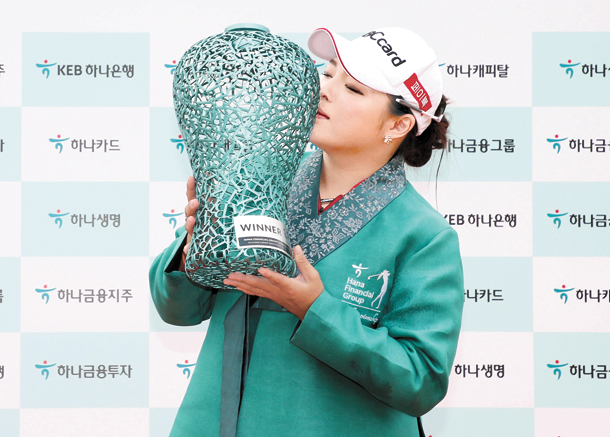 Hitting their third shots from a very similar distance on the final hole, Lee left herself a long birdie putt while Jang hit the perfect shot, leaving herself a tap-in birdie putt. As Lee made bogey with a three-putt, Jang picked up the dramatic win.

With three birdies and a bogey, Jang shot two under par, 70, to finish the tournament at 12 under par, 276.

This was Jang’s 11th win on the KLPGA Tour but her first since April 2018.

With a win, Jang took home the prize money of 375 million won ($314,792). As the Hana Financial Group Championship had the highest total purse among all KLPGA and the KPGA Tour events, Jang’s victory will allow her to make a big jump on the KLPGA Tour’s money ranking. Jang is now ranked second on the Tour’s seasonal money ranking and is ranked third in Player of the Year standings.

In addition to her win, Jang was also awarded 10 million won by setting a new course record during the second round. Jang shot seven under par, 65, on the second day.

“I’m honored to be the inaugural champion of Hana Financial Group Championship, a tournament that I share a name with,” Jang said. “There were times that I wanted to give up because I was some shots behind. But I once again learned that you’ll never know [the winner] until you take off my glove. Rather than hoping for others to make a mistake, I was only thinking about playing my best.”

The World No. 1 Ko Jin-young hoped to redeem herself with a win but finished tied for fourth by shooting one over par in the final round, finishing the four-round total at seven under par, 281.

The inaugural Hana Financial Group Championship turned out to be a huge success as it saw 61,368 people coming out to the golf course to be part of the gallery. On the final day of the tournament, there were 28,750 in attendance at the Sky 72 Golf & Resort Ocean Course.

The KLPGA Tour will continue its season at the 20th Hite Jinro Championship, starting from Thursday to Oct. 13, at Blue Heron Golf Club in Gyeonggi.