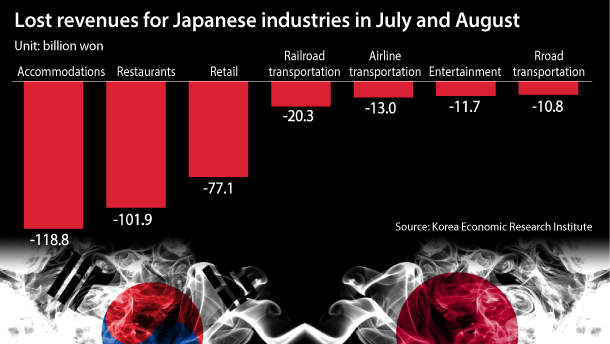 Japan missed out on more than 350 billion won ($294 million) in tourism revenues in July and August amid continuing diplomatic conflict between Seoul and Tokyo, a major think tank said.

On the flip side, Korea saw a much smaller loss in the same period: around 39.9 billion won, largely the result of local airlines operating fewer flights to Japan.

The think tank said the number of Koreans traveling to Japan fell sharply after Tokyo started restricting exports of three industrial materials as a result of diplomatic discord. Koreans responded by staging a boycott of Japanese goods at home and eschewing trips to Japan.

The think tank said it compared the amount of spending by Koreans in Japan during July and August with the same months in 2018.

According to the Korea Tourism Organization, the number of Koreans that visited Japan in July and August was 870,400, down 27.6 percent from a year earlier.

“Japanese people who visited Korea in July and August booked their flights before the relationship between Seoul and Tokyo became hostile,” KERI said.

“It is suspected that the increase in the number of Japanese visitors during those months was a result of the country’s distinct culture of not canceling trips.”

Even though the number of Japanese visitors to Korea increased during the summer, Korea’s airlines lost revenues because they cut flights from Korea to Japan.

While local hotels, restaurants, bars and retailers saw their profits rise on-year during the summer thanks to spending by Japanese tourists, the airlines lost around 95.5 billion won in revenues.

“If the relationship between the two countries continues to worsen, the number of Japanese visitors to Korea could fall as well,” said Yoo Hwan-ik, a director at KERI. “The negative effect for Korea could snowball in the long-term.”