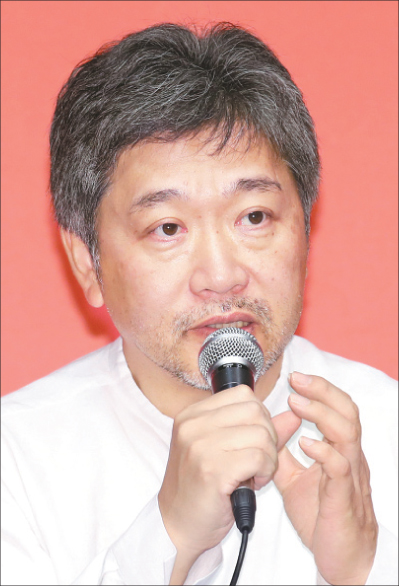 Cannes Palme d’Or-winning Japanese director Hirokazu Kore-eda says he has come to Korea to show “solidarity” with his fans and fellow filmmakers as governments in Seoul and Tokyo fight out a bitter trade war.

“Through showing support for each other we can solve and overcome these political problems,” Kore-eda said Saturday as he formally accepted the Asian Filmmaker of the Year of Award from Korea’s Busan International Film Festival (BIFF).

Although the 10-day BIFF features Japanese films throughout its program, eyebrows were raised at the end of September when it was revealed that the upcoming Tokyo International Film Festival (TIFF) had not selected any Korean productions for its main award.

Kore-eda pointed to BIFF’s own history with problematic politics as an “inspiration” to filmmakers and to the world.

The Korean festival had come under intense governmental pressure in 2014 when it screened a controversial documentary about the Sewol ferry disaster that claimed the lives of more than 300 people, many of them children.

The festival was told to withdraw the film but kept it on the program and then faced budget cuts and criminal charges filed against senior management.

The matter was only really resolved with the arrival of the government of Moon Jae-in in 2017.

“When Busan was under political suppression, many international film people showed their support and I was one of them,” said Kore-eda.

“Now, after all those years of difficulty, Busan has been able to come this far. That’s why I am able to visit this day. Back then solidarity with Busan showed it could endure through the problems it was having with politics. And I hope we can do the same today.”

The 57-year-old won the prestigious Palme d’Or last year for his family drama “Shoplifters,” a cutting look at a family living on the edges of Japanese society.

He has returned to BIFF this year with the family drama “The Truth,” his first non-Japanese feature.