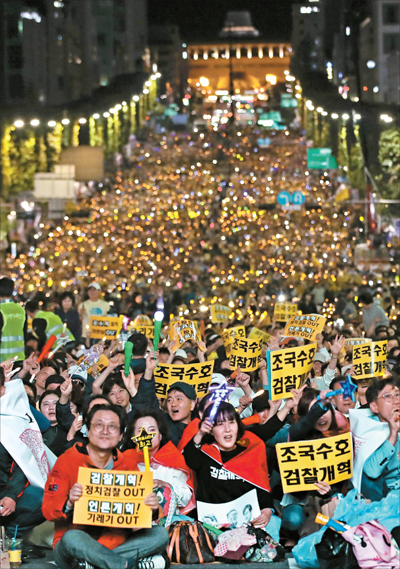 Crowds of people who support President Moon Jae-in and Justice Minister Cho Kuk call for prosecutorial reform in a candlelight vigil Saturday near the Supreme Prosecutors’ Office in Seocho District, southern Seoul. A smaller group of conservatives rallied nearby to call on Cho to step down. [NEWS1]

Roads near the Supreme Prosecutors’ Office (SPO) in Seocho District, southern Seoul, were flooded with demonstrators on Saturday calling for prosecutorial reform, the second consecutive week that a massive crowd showed up to support President Moon Jae-in and Justice Minister Cho Kuk’s attempts to curb their power.

It was not precisely known how many people showed up, for neither the organizer nor police officers announced estimates. The rally, however, occupied more roads than on Sept. 28, when organizers claimed between 1.5 million and 2.5 million people participated.

The organizers, a coalition of liberal civic groups, have been holding candlelight vigils near the SPO since Sept. 16 as prosecutors investigate Cho and his family and a litany of allegations against them.

But it was only on Sept. 28 - the seventh protest of its kind - that the turnout started to significantly swell, a day after Moon gave an unprecedented scolding to prosecutors for using “almost all investigative powers” against his justice minister at a time when the public was increasingly asking for prosecutorial reform.

The demonstration last Saturday was the eighth of its kind.

Some 5,000 police officers were dispatched to the scene for safety and 11 ambulances and 21 paramedics were on standby as seas of people held yellow signs that called for the “protection” of Cho, prosecutorial reforms, the abolition of the prosecution’s powerful special investigation departments and the establishment of a special law enforcement body aimed at probing high-level government officials, prosecutors, politicians and former presidents as well as their relatives.

Prof. Kim Min-woong of Kyung Hee University’s Global Academy for Future Civilizations in Seoul took to the podium at one point during the candlelight vigil and denounced prosecutors for getting “over the president’s head,” saying that Cho had to win his battle against the prosecution in order to realize meaningful reforms.

Kim Nam-kook, a lawyer, said the “actual purpose” of prosecutors indicting Chung Kyung-sim, Cho’s wife, last month on allegations she fabricated an award for her daughter to help her get into medical school was to “threaten” the president not to tap Cho as his justice minister.

In order for prosecutors to show they are truly willing to reform themselves, Kim added, they must “change their ways of investigating” Cho.

As pro-Cho forces rallied into the night, a smaller group of anti-Cho protesters occupied an adjacent area near the SPO to call on Cho to step down. They held red signs that read “Arrest Cho Kuk and protect constitutionalism” and “Impeach Moon Jae-in.”

The ruling Democratic Party (DP) on Saturday supported the pro-Cho candlelight vigils, saying participants convened “voluntarily” without any outside pressure. The DP said prosecutors should listen to the public’s calls for change.

The main opposition Liberty Korea Party (LKP) accused the DP of mobilizing supporters, saying Moon’s decision to make Cho his justice minister has “polarized the country in half.”