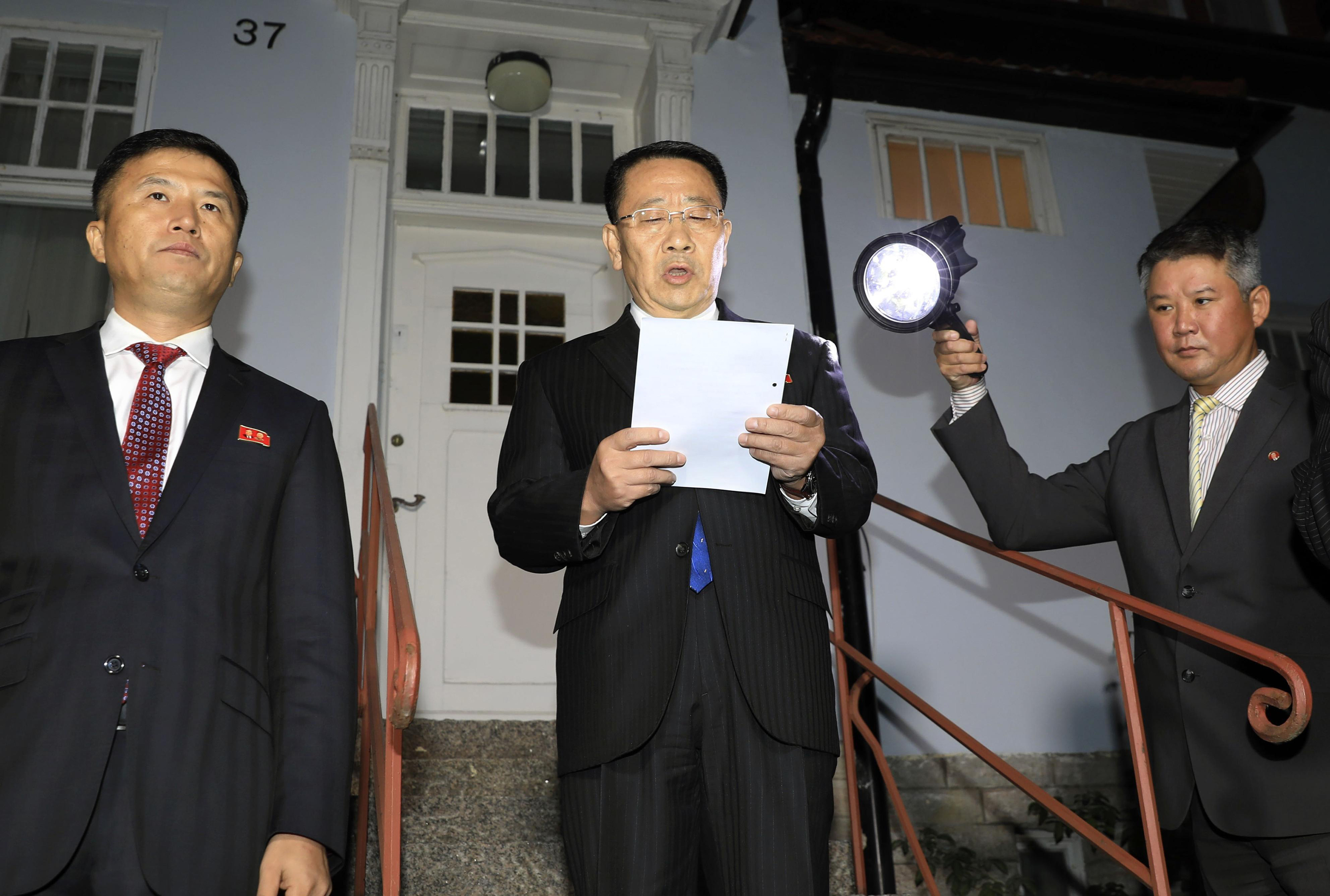 The first denuclearization talks between the United States and North Korea in seven months ended fruitlessly in Sweden on Saturday, with Pyongyang blaming Washington for failing to bring anything new to the table.

After returning to the North Korean embassy in Stockholm after eight and a half hours of discussions, the regime’s top nuclear negotiator Kim Myong-gil announced the talks had “broken down” as a result of the United States’ “inability to abandon its outdated position and attitude.”

In marked contrast, the U.S. State Department on Saturday said in a statement that its envoys “brought creative ideas and had good discussions” with their North Korean counterparts, which represented the first official resumption of bilateral dialogue since the second U.S.-North Korea summit collapsed in Hanoi, Vietnam, last February.

According to a diplomatic source familiar with the talks, the U.S. delegation led by Special Representative for North Korea Stephen Biegun did not, in fact, offer any proposals that went beyond the original U.S. position in Hanoi – especially in terms of concessions it could offer Pyongyang in exchange for steps toward denuclearization.

In particular, the source said, the U.S. nixed the possibility of granting sanctions relief in the early stages of the denuclearization process, even if the North dismantled its nuclear complex in Yongbyon, North Pyongan Province, as offered by North Korean leader Kim Jong-un in Hanoi.

In a statement delivered outside the North Korean embassy at around 6:30 p.m., Kim said the U.S. delegation “greatly disappointed” the North Koreans by presenting “nothing” worthy of discussion.

“One thing is for sure – the United States did not come [to the table] with any of the [new] calculations that we requested,” Kim said. “The calculus we have been asking for is that the United States prove with actions that it will take steps to remove all institutional barriers threatening our security and infringing on our development.”

Adding that his delegation concluded the United States was “realistically not ready for negotiations,” Kim Myong-gil said the talks would temporarily stop “until the end of the year” so that Washington could reconsider its stance.

In reply to a reporter’s question about whether the North would maintain its moratorium on nuclear and intercontinental ballistic missile tests, the envoy laid out a warning characteristic to North Korean negotiating tactics, saying it was “up to the U.S. position” whether the tests would be kept under wraps or “revived.”

Kim then related in detail the U.S. policies that were irking Pyongyang – what he termed “15 sanctions measures” imposed after the first U.S.-North Korea summit in Singapore; the U.S. combined military exercises with South Korea “that President [Donald Trump] personally promised to halt;” and the deployment of “cutting-edge warfare technology” in and around the Korean Peninsula that were “clearly threatening [the North’s] right to survival and development.”

The North Korean delegation presented “realistic options” to break through the stalemate brought on by Washington’s “mistaken approach,” Kim said.

If Kim’s words are to be believed, the U.S. delegation again insisted in Stockholm that North Korea act first by taking major steps toward denuclearization before receiving any economic concessions – a position that the North Koreans found unacceptable in Hanoi. The United States’ other non-sanction related proposals, like the reciprocal establishment of liaison offices and a formal declaration to end the 1950-53 Korean War, have done little to propel Pyongyang toward nuclear disarmament.

While keeping to a positive tone, the U.S. State Department statement, released in the name of its spokesperson Morgan Ortagus, appeared to acknowledge the talks had not proceeded smoothly, saying the two sides “will not overcome a legacy of 70 years of war and hostility on the Korean Peninsula through the course of a single Saturday.”

In terms of what was offered, the statement said the U.S. delegation “previewed a number of new initiatives that would allow us to make progress in each of the four pillars of the Singapore joint statement” without elaboration as to what they entailed.

A day before the talks in Sweden, U.S. Secretary of State Mike Pompeo hinted at new proposals to reporters in Athens, saying Washington’s nuclear envoys had “a set of ideas” that could help push forward the agreement made in the summit between Kim Jong-un and Donald Trump in Singapore in June 2018, which loosely pledged the two sides would work towards the North’s complete denuclearization and the establishment of a lasting peace regime on the peninsula.

Quoting two sources familiar with the Stockholm talks, the U.S.-based news outlet Vox last Wednesday ran an article that said the proposals would involve the United States suspending sanctions on North Korea’s textile and coal exports for 36 months in exchange for the closure of the Yongbyon nuclear complex, as well as an end-of-war declaration. The report, however, was quickly denied by the State Department, which said its contents were “completely false.”

With Saturday’s events again highlighting the gulf between the two countries’ positions, it remains unclear when envoys will be able to meet again. While Kim Myong-gil called for Washington to rethink its stance until the end of the year, the State Department statement said its delegation accepted Sweden’s proposal to return “in two weeks’ time, in order to continue discussions on all of the topics.”