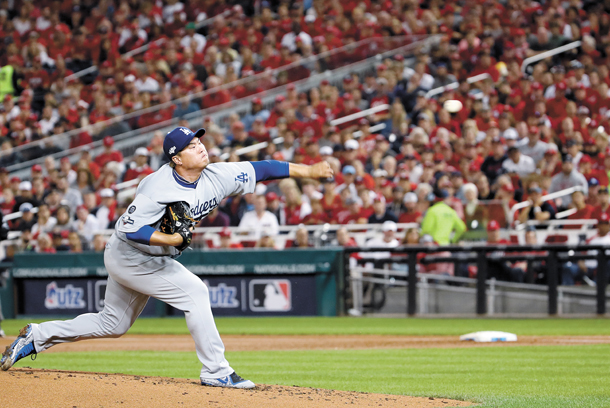 Ryu Hyun-jin of the Los Angeles Dodgers throws a pitch during Game 3 of the National League Division Series game against the Washington Nationals at Nationals Park in Washington D.C. on Sunday. [YONHAP]

Ryu Hyun-jin of the Los Angeles Dodgers picked up a win during Game 3 of the National League Division Series against the Washington Nationals at Nationals Park in Washington D.C. on Sunday.

Ryu didn’t get off to the best start as he gave up two runs at the bottom of the first inning. After walking Adam Eaton, the Nationals’ clean-up hitter Juan Soto hit a high fastball from Ryu, thrown at a speed of 146 kilometers per hour (90.7 miles per hour), over the center fence.

“That home run was a wake-up call,” Ryu was quoted as saying in Yonhap. “It was a mistake. I wanted to go a bit more inside on that pitch, but I missed on the outside corner. I was determined not to allow any more runs after that.”

Despite a home run in the beginning of the game, Ryu got back to his pace by tossing four scoreless innings, from the second to the fifth. At the top of the fifth, the Dodgers started to catch up to the Nationals.

Max Muncy scored the Dodgers’ first run of the day with a solo home run. Then, the club had a big inning at the top of the sixth inning. Against Patrick Corbin, the Nationals’ second pitcher of the day, the Dodgers’ clean-up hitter Cody Bellinger recorded his first hit of the 2019 Division Series.

Although Corey Seager and A.J. Pollock struck out, pinch hitter David Freese kept the Dodgers alive by adding another hit. With two outs and runners on first and third, catcher Russell Martin hit a two-run double to give the Dodgers a 3-2 lead.

But that was only the start.

After the two runs, Chris Taylor was walked and Kike Hernandez hit another two-run double to further extend their lead.

The Nationals walked Muncy but their decision to pitch against Justin Turner didn’t turn out the way they had planned it. Turner continued the Dodgers’ big inning by hitting a three-run home run to extend the team’s lead to 8-2.

Kelly didn’t have the best start to the inning as he quickly loaded the bases and gave up a run with a wild pitch. The Dodgers quickly switched the pitcher to Julio Urias, who ended the inning, after giving up another run.

After scoreless seventh and the eighth innings, the Dodgers added two more runs with Turner’s two-run home run at the top of the ninth.

The Dodgers took home their second win of the series by defeating the Nationals 10-4. Los Angeles now leads the Division series with two wins and a loss.

Throughout five innings, Ryu gave up two runs and two walks while striking out three. With the win, Ryu started his 2019 postseason campaign with a 3.60 ERA.

“In the postseason, it’s important to set the tone early,” Ryu was quoted as saying. “I hope I won’t make mistakes like I did today. I’ll have to pitch like I did in the latter part of today’s game.”

In the regular season, Ryu finished with 14 wins, five losses and a 2.32 ERA. Ryu’s ERA stood out in the major league as it was the lowest this year.

Looking at Ryu’s career postseason statistics, a win on Sunday’s game allowed him to improve his record to three wins and two losses, with a 4.05 ERA.

Last season, Ryu became the first Korean starter to appear in the World Series game last year, during Game 2 against the Boston Red Sox. A win would have been a historic achievement, but Ryu’s first World Series start wasn’t the best game, as he picked up a loss by giving up four runs in four and two thirds of an inning with a 7.71 ERA.

Game 4 of the National League Division Series will be played at Nationals Park again today, starting at 7:40 a.m., Korean time.