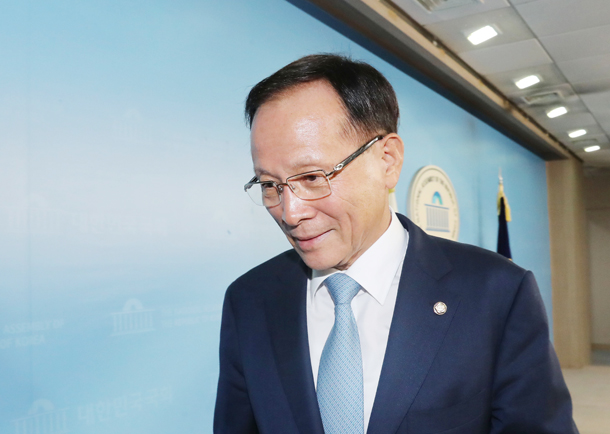 Rep. Lee Soo-hyuck, a designate for Korea’s Ambassador to the United States, leaves a press room at the National Assembly after a press conference on Aug. 9. [KIM KYUNG-ROK]

In 2010, the Pakistani government wanted to send a veteran diplomat who had served as ambassador to the United States and India to Saudi Arabia and asked for its agreement, but Saudi Arabia rejected it. Before the Saudi rejection, the United Arab Emirates and Bahrain also refused. This diplomat could not get an agrément from Arab countries. Pakistan later found out that his name was vulgar in Arabic and these countries did not want to receive him as a Pakistani ambassador.

“Agrément” refers to seeking agreement of the receiving country before sending a diplomatic mission. It was defined in the Vienna Convention on Diplomatic Relations of 1961 in order to prevent international conflict from a country rejecting an officially appointed diplomat from another country. The person who receives an agrément is called a persona grata. In contrast, a person who did not get an agrément is called a persona non grata.

At the National Assembly Foreign and Unification Committee interpellation session on Oct. 4, the delayed agrément by the U.S. government on Korean Ambassador to the U.S. designee Lee Soo-hyuck became a controversy. Since the designation was announced on Aug. 9, 56 days have passed, and agrément is yet to come. The opposition party claimed that Washington was expressing discontent about Korea’s ending of the General Security of Military Information Agreement (Gsomia) with Japan in a roundabout way and showed concern about cracks in the alliance.

It is an exaggeration to interpret the delayed agrément as an offshoot of the Moon Jae-in administration’s “Gsomia non grata.” It would be fortunate if only administrative procedure takes time. But it is a different matter if it is another warning sign of Korea-U.S. relations. Rather, I would prefer the ambassador’s name to hinder the agrément.