Moon says the nation is not split

Moon says the nation is not split 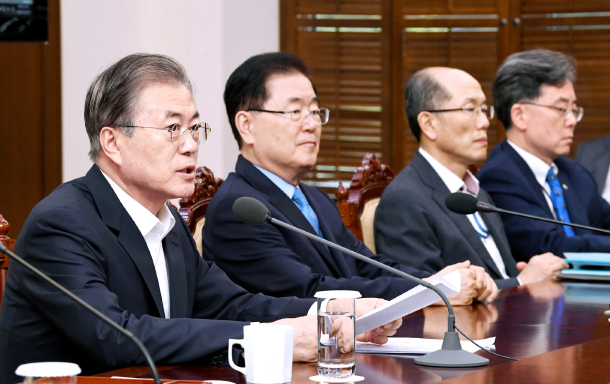 President Moon Jae-in on Monday speaks during a meeting with senior presidential aides at the Blue House in central Seoul calling for a swift completion of the initiative to reform the prosecution. [JOINT PRESS CORPS]

President Moon Jae-in said Monday that he does not think the country is split over the latest controversy surrounding the appointment of Justice Minister Cho Kuk and the administration’s initiative to reform the prosecution, calling for a swift completion of the initiative.

In his opening remarks at a meeting with senior presidential aides, Moon said he has taken note of various public opinions expressed recently through street rallies to protest or support the prosecutorial reforms. “It is possible that the people’s opinions are divided on a political matter,” Moon said. “But I don’t think it means the nation is split.”

Moon said the street rallies also have a positive side because the people are expressing their opinions on their own when the politicians failed to represent them. He, however, said it is undesirable for the differences in political opinions to create extreme confrontations or the concentration of all political resources.

It was the first time that Moon commented on the series of confronting rallies on Cho and his reform measures. A series of rallies by the liberals have taken place outside the prosecution over the past weeks in support of Cho and to denounce the probes into the Cho family, while another massive rally took place near the Blue House last week to demand Cho’s resignation.

“Many have expressed their opinions and society has listened to them, so we must gather our wisdom to resolve the issue through proper procedures,” Moon said.

He then urged the lawmakers to pass bills intended to reform the state prosecution agency. “Among the various opinions, a consensus was seen that prosecutorial reform is as urgent as guaranteeing political neutrality of the prosecution,” Moon said. “The government and the National Assembly must pay attention to this. I urge the National Assembly to pass the bills on establishment of a new investigative body for senior public servants and redistribute investigative powers between the prosecution and the police as soon as possible.”

Asked if Moon has concluded that the protesters who have demand Cho’s resignation are also supporting the reform of the prosecution, a presidential aide said Monday that opinion polls have shown that the majority of the public are supporting prosecutorial reform. “I want to ask if the participants of the Gwanghwamun rally are opposing the need of the prosecutorial reform,” the official said.

Meanwhile, Moon’s approval rating dropped to 44.4 percent, the lowest ever since he took office in May 2017. According to Realmeter, political controversy surrounding Cho and the prosecutorial reform, deepening economic woes and North Korea’s firing of a submarine-based ballistic missile have contributed to the lowest weekly rating.

The survey was commissioned by YTN, and 2,007 people nationwide, aged 19 or older, were polled throughout last week, except for the National Foundation Holiday that fell on Thursday. The margin of error is plus or minus 2.2 percentage points.