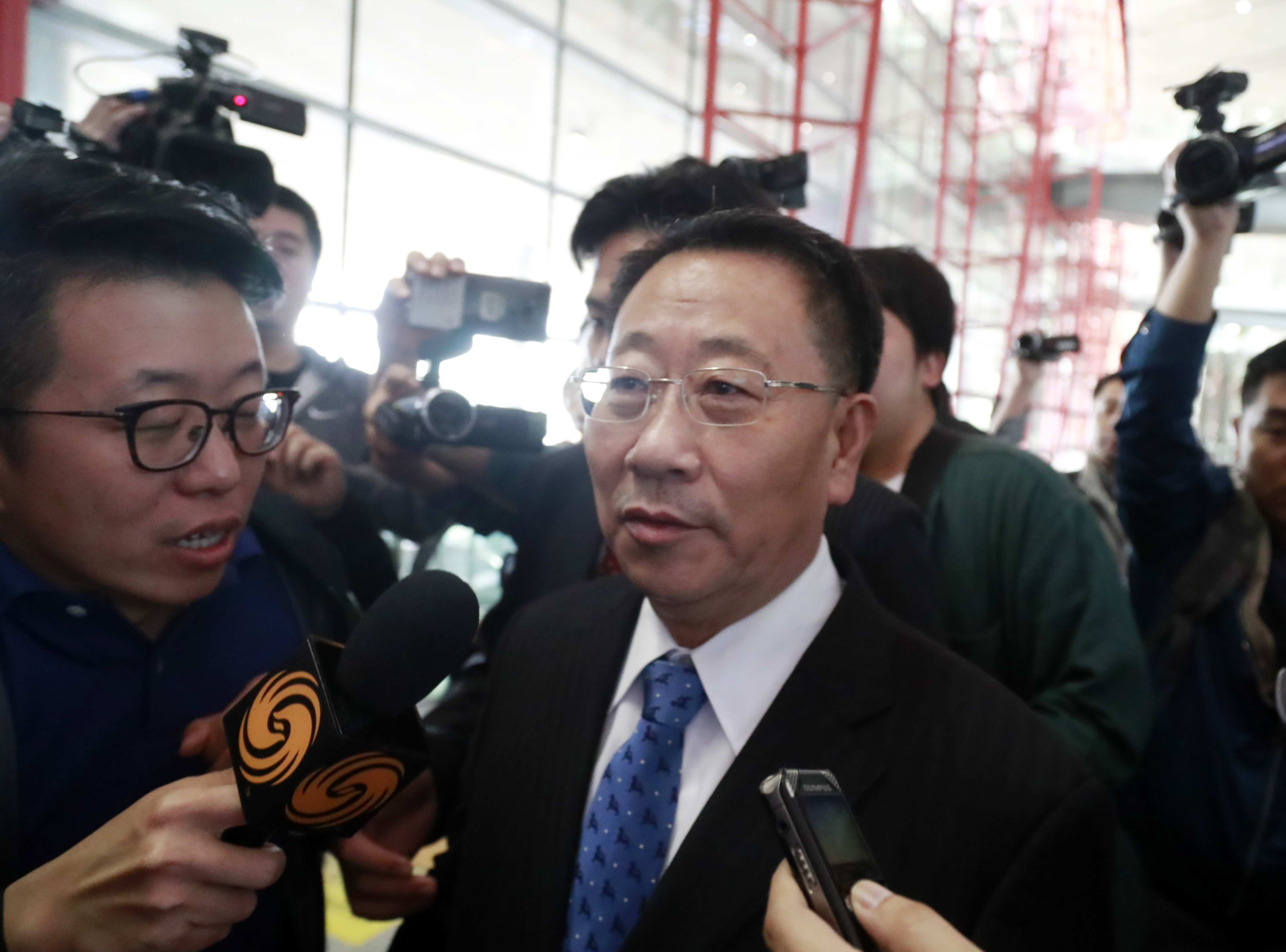 Kim Myong-gil, North Korea’s chief nuclear negotiator, is surrounded by reporters as he arrives at the airport in Beijing Monday after holding talks with the U.S. delegation in Stockholm. [YONHAP]

North Korea’s top nuclear envoy on Monday said it was up to the United States to decide whether the two sides will hold further denuclearization talks, pending sufficient change from Washington on its position.

When asked whether negotiations would resume in Sweden within two weeks, as alluded to in the U.S. State Department’s official statement on the talks Saturday, Kim retorted by saying he did not know of such plans to return to Stockholm in that period.

“The United States has failed to arrive at any [acceptable] calculus after the Panmunjom meeting. What makes you think they will be able to create one within two weeks?” Kim said, referring to the abrupt rendezvous between U.S. President Donald Trump and North Korean leader Kim Jong-un at the inter-Korean border in late June, which put talks back on the books.

Kim Myong-gil also took a page out of the North Korean playbook of brinksmanship tactics, reminding Washington of what was at stake with the present negotiation process.

“If the United States is not properly ready, who knows what horrible disasters can occur,” Kim said. “Let’s see what happens.”

These ominous remarks tie into an earlier warning delivered by Kim following the talks on Saturday, in which he said the North could rethink its moratorium on nuclear and intercontinental ballistic missile tests if the United States failed to pivot from its current position.

Analysts have pointed out that the breakdown of Saturday’s discussions makes another North Korean weapons test highly likely and imminent, given that Pyongyang tested what is believed to be a submarine-launched ballistic missile ahead of the talks last Wednesday in a move that was widely interpreted as an attempt to shore up its negotiating position.

Kim, a seasoned diplomat with negotiating experience from the six-party talks of the 2000s and a former North Korean ambassador to Vietnam, declined to comment further on what Pyongyang wanted from the United States that could make a deal viable, saying he had already delivered such demands to U.S. envoys and it was up to them to answer.

Only 15 minutes after the talks fell apart in Sweden Saturday evening local time, Kim delivered a visceral statement on the steps of the North Korean Embassy in Stockholm, saying Washington bore the “entire responsibility” for the talks’ failure due to its “inability to abandon its outdated position and attitude.”
A statement from the U.S. State Department released just three hours later said Kim’s comments did not “reflect the content or the spirit of [Saturday’s] 8 1/2 hour discussion,” adding its delegates “brought creative ideas and had good discussions” with their North Korean counterparts.

On Sunday evening, however, North Korea’s Foreign Ministry fired back at the U.S. response, with its spokesperson accusing the U.S. envoys of taking a “trite stance” on the talks that made its own delegate question "whether the United States truly has a stand to solve the issue through dialogue.”
The statement also went on to contend the engagement in Sweden was engineered by Washington “to meet its political goal of abusing the [North Korea-U.S.] dialogue for its domestic political events on schedule,” perhaps a reference to Trump’s political troubles at home.

Mirroring Kim’s remarks in Beijing almost verbatim, the statement also called the United States’ reference to a resumption in talks in two weeks “completely ungrounded” since it was not likely Washington could produce an acceptable proposal within a fortnight.

“We have no intention to hold such sickening negotiations as what happened this time before the United States takes a substantial step to make complete and irreversible withdrawal of the hostile policy toward the DPRK, a policy that threatens the security of the country and hampers the rights to existence and development of its people,” the statement added, using the acronym for the country’s official name, the Democratic People’s Republic of Korea.

Calling once again for a “new calculation method” from Washington, the statement ended with an ultimatum of sorts, threatening that all bilateral dealings may come to an end if the United States’ attitude does not change by the deadline of the end of this year.

The South Korean government, which had high expectations for the talks, responded to the breakdown with some dismay, but its presidential office stressed it was too early to make a judgement on the process. Seoul's chief nuclear negotiator, Lee Do-hoon, left for Washington Monday to discuss the issue with the top U.S. envoy to the talks, U.S. Special Representative for North Korea Stephen Biegun.