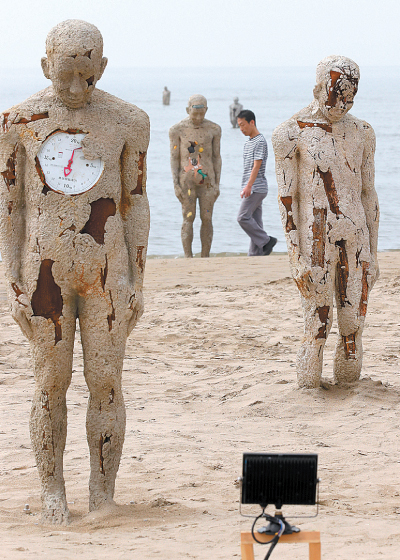 “Where Should We Go” by Lee Seung-soo visualizes how humanity becomes ill from the waste it leaves behind. [JOONGANG ILBO]

This year’s Sea Art Festival kicked off on Sept. 28 at Dadaepo Beach in western Busan and will run until Oct. 27. The event features 21 works by 20 teams of artists. The heartbreaks that ail contemporary humanity - the environment, refugees and class division - may not be the first things that comes to your mind when you hear the title of the festival, but the theme gives visitors the opportunity to visualize such problems.

“When people think of the sea, they usually think of happy images - joy, hope and summer,” said the festival’s director Seo Sang-ho. “So I worried about associating the word ‘heartbreak’ with the sea. But it began from the question, how does public art work? And what can a museum do for people in a public space? So that’s how I came up with an art festival that lets people experience the same thing and take home questions about the environment.”

The Sea Art Festival is held every other year by the Busan Biennale Organizing Committee, when the Busan Biennale isn’t held. This year’s director, Seo, was appointed in February. He currently runs Openspace Bae, a nonprofit based in Busan to support up-and-coming artists.

The Sea Art Festival began in 1987 as a part of the pre-Olympic celebration by the city before the 1988 Seoul Olympics and has been organized by the Busan Biennale Organizing Committee since 2011. The festival saw around 380,000 visitors last year during its 30-day run at Dadaepo Beach.

This year, various artists have used the sea to discuss the things they believe have hurt humanity. “Moving Sculpture Garden,” which is placed at the entrance of the park and was made by the artist team The Wild Rabbit Plays the Tambourine in the Art Center, offers a look at how people hide their inner thoughts and cannot fulfill their true desires.

Works by Manish Lal Shrestha, Hsiao-chi Tsai & Kimiya Yoshikawa and James Tapscott lead visitors to the sandy beach, where the rest of the works are on display.

The human-like sand sculptures by Lee Seung-soo, titled “Where Should We Go,” illustrate how humanity is hurting itself with the waste that is left behind in nature. Visitors can then stand inside “If There is an Island on the Beach” by Taitung Dawn Artist Village & Toko Studio to feel the coziness of civilization.

At “Tales from the Wind: Litanies of the Sea” by Alfredo Aquilizan and Isabel Aquilizan, visitors are warned to be careful to not become submerged in the eerie mood created by the bamboo forest.