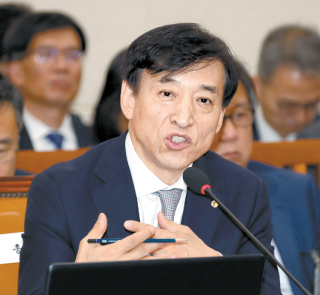 Korea’s finance chiefs were put in the hot seat during a national audit on Tuesday over plunging consumer prices and the improper sale of controversial investment products.

Lawmakers blamed Lee Ju-yeol, chief of the country’s central bank, for failing to contain persistently low inflation, a downturn that some see as the onset of deflation.

Lee raised the need for more expansionary fiscal and monetary policies if fears of deflation continue to grow, although he played down the possibility.

“If there is the likelihood of deflation, monetary and fiscal policies need to play more active roles,” he said, implying a further rate cut and government stimulus packages.

However, he undermined the view that Korea is entering deflation, citing temporary factors such as turbulent agricultural prices and base effect as the main reason for a record low inflation in recent months.

Inflation went into the red last month for the first time since record keeping began in 1965, underscoring the economy’s worsening woes.

Consumer prices last month fell 0.4 percent on year, after hitting zero in August, rounded up from minus 0.038 percent.

Despite the explanation, market analysts say that low inflation trend was not solely affected by one-time factors since core inflation, which excludes volatile food and energy sectors, has been on a downward trend as well.

As for Korea’s growth prospects, Lee remained cautious but maintained that gross domestic product growth is unlikely to dip into the 1 percent range.

“The Korean economy won’t likely meet the 2.2 percent forecast by the Bank of Korea this year,” Lee said. “But things are not as dire as to plunge into the 1 percent level.”

In another room, the head of the Financial Supervisory Service, the country’s financial watchdog, was grilled over the fiasco involving derivative-linked investment products that have led to hundreds of billion won in losses.

The derivative-linked securities (DLSs) and derivative-linked funds (DLFs), which tracked the interest rates of 10-year German treasury bonds and swap rates of pounds sterling and the U.S. dollar, came under scrutiny due to the huge losses and unfair commission fees system.

Yoon indicated that the chief executive officers of the banks that sold the products - Woori Bank and KEB Hana Bank - could be held accountable.

In the announcement of a preliminary investigation, the financial regulator said the major banks were negligent in selling dangerous derivative-linked investments, adding that 20 percent may have been improperly sold with clients’ application documents not meeting the necessary requirements.