Cho details an agenda for reform

Cho details an agenda for reform 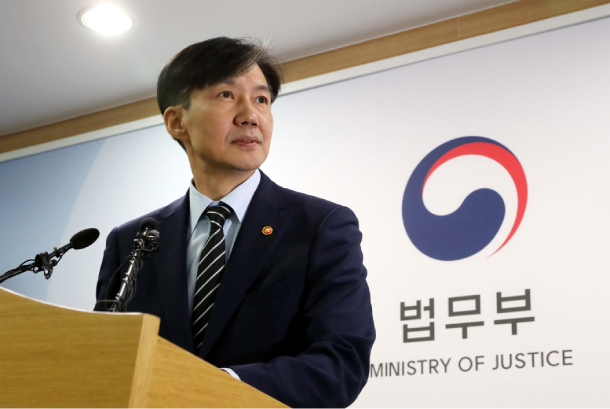 Justice Minister Cho Kuk on Tuesday announced an ambitious blueprint for reforms of the prosecutorial branch of the criminal justice system involving a significant curtailing of its investigative prerogatives and stricter guidelines.

In a press briefing at the Gwacheon Government Complex in Gyeonggi that took place almost exactly a month since he took office, Cho provided a highly segmented set of plans and a timetable for implementation within the year.

The most urgent, to be put into practice immediately, involved scaling back the practice of dispatching prosecutors to different government agencies, the creation of a committee to review these dispatches and abolishing the private vehicles given to top prosecutors.

Goals to be pursued within the month include the abolition or major reduction of special investigative units of prosecutors - save for three - largely tasked with pursuing high-profile corruption cases, expanding the Justice Ministry’s supervisory purview over prosecutors and taking away their right to audit itself.

In addition, Cho said the government would strengthen its guidelines regarding ongoing investigations and ban the prosecution from publicly divulging details of active criminal probes.

In regard to reducing special prosecutorial units, Cho is accepting reform plans put forward by Prosecutor General Yoon Seok-youl on Oct. 1, which were interpreted as a response to a widespread public demand for prosecutorial reform.

In terms of his goals for the rest of this year, Cho said the Justice Ministry would expand its efforts to reduce prosecutorial influence within its own ranks, as well as pursue a sweeping restricting of the Supreme Prosecutors’ Office. The ministry’s human rights guidelines for prosecutorial probes will also be toughened, Cho said, through measures like limiting the number of times prosecutors can summon suspects for questioning and cutting down such interrogations to under eight hours.

Many of the plans unveiled Tuesday address long-standing public criticisms of the prosecution, which, as a result of its broad investigative capacities, the power to indict or not and a decades-old culture of exclusivity and privilege, has exercised extraordinary influence over Korean society and politics.

The decision to cut down on the system of prosecutors dispatched to different parts of the government is an example. Since 1961, prosecutors have been regularly sent to work at different government bodies or offices including the National Assembly, ministries and the National Intelligence Service in order to serve in a legal advisory capacity. These figures amassed significant influence within the organizations by serving as a liaison to the prosecution, giving rise to suspicions of widespread favor trading.

The Justice Ministry itself, while officially outranking the prosecution, is traditionally staffed with many incumbent prosecutors, giving rise to a situation where it has been unable to operate independently.

By putting forward reform measures, Cho, who is widely regarded as the architect and chief enforcer of the Moon Jae-in administration’s judicial reforms, seeks to curtail the prosecution’s vast influence in tandem with a wider reform package currently under review at the National Assembly.

Those reform bills - strongly influenced by Cho - were fast-tracked following a contentious struggle in the legislature last April and essentially outline a redistribution of power between police and prosecutors and the creation of a new independent agency focusing on corruption by high-ranking public officials - both of which threaten to undermine prosecutors’ monopoly on leading criminal investigations.

Cho’s supporters have claimed his ambition to overhaul the county’s chief investigative power is the reason why prosecutors have subjected him and his family to an unprecedentedly intense criminal probe ever since his nomination as justice minister.

His detractors, however, spearheaded by the political opposition, say the reform pledges themselves are attempts to influence the ongoing investigation into his family.