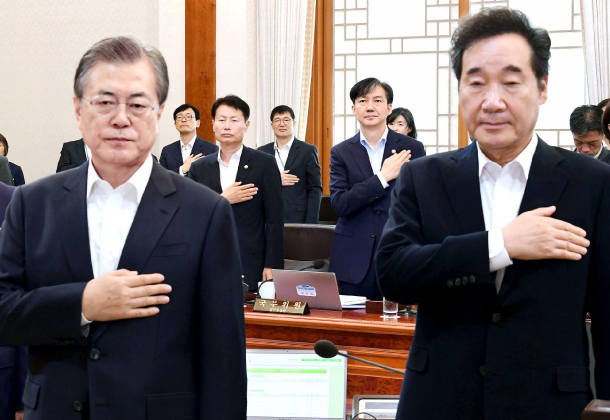 A Korean-Japanese parliamentary group is promoting an idea to break the diplomatic logjam between the two countries that involves Seoul returning to a bilateral intelligence-sharing pact and Tokyo cancelling export restrictions, a member of the group exclusively told the JoongAng Ilbo on Tuesday.

One “important opportunity” for both countries to decide on such a “simultaneous action plan” will come at the end of this month, when Seoul dispatches an official to Japanese Emperor Naruhito’s enthronement ceremony on Oct. 22 in Tokyo, the source continued.

Seoul has yet to announce who it is sending, but one strong candidate appears to be Prime Minister Lee Nak-yon.

A member of the parliamentary group who spoke on the condition of anonymity told the JoongAng Ilbo in a telephone interview that the group has been holding serious discussions on the simultaneous action plan as the Nov. 22 deadline for the termination of the General Security of Military Information Agreement (Gsomia) nears.

Signed in November 2016, Gsomia is renewed automatically every year unless either of the two countries decides to scrap the pact, in which case it must provide the other with at least a 90 days’ notice. The Blue House announced in late August that it decided to withdraw from Gsomia, and unless it retracts that announcement, the intelligence-sharing pact will no longer be in force from Nov. 23.

The source did not explain in the JoongAng Ilbo report whether the parliamentary group’s discussions were having any impact on Tokyo yet, but if Japanese Prime Minister Shinzo Abe’s recent remarks give any hints, it appears the lawmakers still have a long way to go.

During a meeting between Japanese political parties on Tuesday, Abe steadfastly blamed Seoul for “hurting” mutual trust between Korea and Japan by violating a 1965 treaty and urged Seoul to obey the principles of international law.

Abe continued that it was up to Seoul to create an opportunity for both countries to return to a “sound relationship.”

President Moon Jae-in showed no sign of backing down either.

During a cabinet meeting on Tuesday at the Blue House, Moon praised the Korean government and local companies for “coping well” with Japan’s export restrictions so far, saying “meaningful achievements” were made on “numerous fronts,” such as companies diversifying their import routes, improving “technological independence” and seeking cooperation between bigger and smaller companies.

Moon said if Korean companies use Japan’s restrictions as a chance to “fundamentally change our industrial structure,” such efforts will immensely boost Korea’s economic competitiveness.

With both Moon and Abe refusing to relent, all eyes are on possible negotiations between the two countries at a lower level later this month.

Citing unnamed diplomatic sources, The Japan Times reported Tuesday that Seoul has told Tokyo it may send Prime Minister Lee to Emperor Naruhito’s enthronement ceremony and that the possibility of Moon’s participation “has vanished.” In case Lee does travel to Japan, meetings may be arranged between him and two former Japanese prime ministers - Yoshiro Mori and Yasuo Fukuda - both of whom belong to the same faction of the Liberal Democratic Party as Abe, the paper wrote.