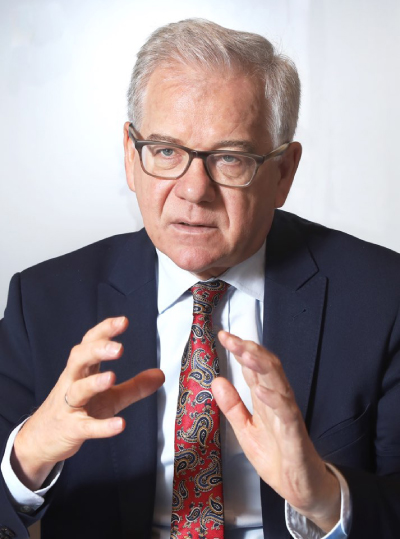 Polish Foreign Minister Jacek Czaputowicz speaks to the Korea JoongAng Daily during his visit to Seoul on Monday. [PARK SANG-MOON]

Poland, once a member of the Neutral Nations Supervisory Commission (NNSC), could re-establish its presence in the demilitarized zone on the Korean Peninsula if asked to do so by its counterparts, said Polish Foreign Minister Jacek Czaputowicz during his recent visit to Seoul.

“At this moment the Polish mission is unable to implement its mandate in its initial location north of the 38th parallel, because after the political transformation established in Europe in 1989, the DPRK expelled Poland from the DMZ,” Minister Czaputowicz told the Korea JoongAng Daily on Monday, during his visit to meet with his counterpart South Korean Foreign Minister Kang Kyung-wha, using the acronyms for North Korea’s official name, which is the Democratic People’s Republic of Korea, and DMZ for the demilitarized zone, located between the two Koreas.

As Poland already has an embassy in Pyongyang, established in 1950, the minister was speaking of the presence the Polish government had in the demilitarized zone as a member of the NNSC, from 1953 to 1995. North Korea expelled the Polish presence in 1995 following the collapse of communism in Poland and its joining of NATO in 1989.

“We are ready to re-establish the diplomatic presence of our mission in the northern part of the peninsula if the political situation allows us to do so,” said Czaputowicz. “Generally we have some features and traditional links established in previous times with North Korea and some status in those commissions - if the situation enables, it could also be offered.

“We are ready to, but we will have to consult with our allies, particularly with the United States and also with other members,” he added. “Of course, the position of North Korea must be positive [for such a proposal].”

The minister was visiting Seoul Monday to commemorate the 30 years of relations between South Korea and Poland which established diplomatic ties in 1989.

He met with his counterpart Kang, Unification Minister Kim Yeon-chul, and joined a meeting of a multilateral working group on cybersecurity, created by Poland and the United States in May this year.

“The Warsaw Process Working Groups number seven total, and one of them concerns cybersecurity. The working groups were created to find out the ways we can guarantee peace and security in the Middle East.” Czaputowicz said. “I was pleased that the Republic of Korea decided to host the meeting of this working group after Minister Kang visited Warsaw in February.”

Czaputowicz said that while the Polish government is open to the role it used to play as a member of the NNSC, it equally stands by the international community’s call for North Korea to abide by sanctions and denuclearization efforts.

“We are in solidarity with the international community, with the U.S., with the Republic of Korea,” he said, “with the stance that North Korea creates a threat and North Korea should obey by sanctions, obey by demands of the Security Council and its obligations concerning nuclear weapons.”

Meanwhile Czaputowicz said rallies on the streets - common to both Poland and Korea today - may be signs that the country’s democratic system, established in the same year Korea and Poland established diplomatic relations, is working.

“It was a very important moment for Poland because we regained our sovereignty to an extent after years of communist [rule] and introduced democracy that year,” Czaputowicz said.

“We established strategic partnership [with Korea] in 2013 and now Republic of Korea is No. 1 investor in Poland from Asia […] Our two presidents met recently in the United Nations on the margins of the UN General Assembly sessions last month. We are looking forward to the visit of the Korean president to Poland next year.”

Having been an activist for democracy in Poland in the 1970s and ‘80s, Czaputowicz said, “Back in those days, when we fought for democracy, [it was] for expressions, for giving possibility to people to simply show their convictions and their ideas - simply to introduce the democratic system,” he said. “And we did it. Now the society is pluralistic, there are different opinions, and people are in different civic movements and different partisans are expressing their opinions. That is what democracy is about.”