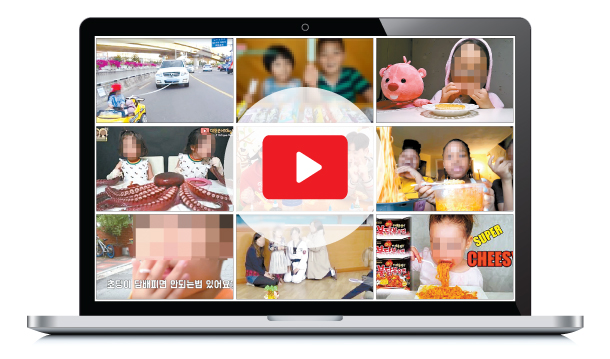 YouTube came under fire for becoming a platform where children are often exploited or abused for click-worthy videos. Some videos that drew outrage in Korea include a young YouTuber driving a toy car on a road, children shivering after eating multiple ice creams, kids of various ages eating extremely spicy noodles, an elementary school student pretending to puff a cigarette and six-year-old twins attempting to eat a whole octopus. [SCREEN CAPTURE, SBS]

The news of a 6-year-old Korean YouTuber and her family purchasing a five-story building worth 9.5 billion won ($7.9 million) in the posh Cheongdam-dong, southern Seoul, shocked many when it was first reported in July.

The family of the kid YouTuber runs two channels - Boram Tube ToysReview and Boram Tube Vlog - with a total of about 19.7 million subscribers.

Some said they “felt deprived” by the news of the kid millionaire and even went so far as uploading a petition to the Blue House web page asking that the government regulate the YouTube channels because it made those who toil away at their jobs feel depressed. Others saw the news as an opportunity and hopped on the bandwagon by signing up their children for private institutes where they could learn how to make video content themselves.

But YouTube channels targeted to kids are likely to be hit hard by a newly-added regulation by the giant video streaming service soon.

In early September, YouTube informed creators who produce content aimed for kids or feature children that they would not be able to put personalized ads on their videos. This new regulation will come into effect in 60 countries after a four-month probation period.

Since personalized ads make up much of the earnings made by YouTubers, many see the new regulation as a death sentence for some big-name YouTube channels for kids.

Compared to the ads targeting only children, personalized ads fetch far higher revenue, thus the kid-friendly channels tend to opt for and play personalized ads based on the watching history of individual users.

In the notification sent to YouTube channels specializing in kid-related content in early September, YouTube said video creators are required to report their content. If they do, they will be allowed to continue producing and posting their child-focused videos, but without the personalized ads. Otherwise, YouTube said it will track down unreported channels using its own technology.

If the channels want to keep playing personalized ads, they should make content about something else.

The new policy by YouTube came out as part of the company’s settlement with the Federal Trade Commission in the United States. The video-sharing website was fined for collecting children’s data without the consent of their parents.

As a result, YouTube will pay a $136 million settlement with the FTC and another $34 million to New York for violating the state’s Children’s Online Privacy Protection Act.

YouTube came under fire for becoming a platform on which children are often exploited and abused.

Many kid-oriented channels are eager to produce click-worthy videos and sometimes put children at risk because an increased number of views and likes is directly linked to more income in the world of YouTube.

In Korea as well, some clips have gone viral after putting children in danger.

In one such video, Lee Bo-ram, the star of Boram Tube ToysReview and Boram Tube Vlog, is driving a toy car on a road right next to real vehicles. She was just five years old when the clip was uploaded.

The video clip was reported to the police by a nonprofit organization and the parents were ordered by the Seoul Family Court to undergo counseling from child protection institutes.

In another video that created controversy, a child YouTuber is shown stealing money from his father’s wallet.

One video featured six-year-old twins being forced to eat a whole octopus that weighed nearly 10 kilograms (22 pounds). In another, a father disguises himself as a burglar and threatens his young daughter by saying that he would kidnap the girl’s mother. The girl eventually bursts into tears.

The new ad policy targeting child-directed channels is likely to be a huge blow to many YouTube channels because many of the highest-grossing YouTube channels produce and distribute children’s content or have child hosts at the center.

Korea is no exception. Of all top 20 YouTube channels in terms of ad revenue, half of them are specialized in child-focused content such as children’s songs or toy reviews or feature children hosts.

How to make money

Super Chat is one product YouTube creators can use to earn money. It gives them the ability to have a live chat with their subscribers. Over the course of a live chat session with the video creator, subscribers are able to pay to have their comments pinned on the live chat stream.

But personalized ads create the most income for YouTube creators.

Subscribers watch ads being played in the beginning or in the middle of video clips. The ads are paid for by advertisers, with half of the money going to YouTube and the rest going to video creators.

Many YouTube channels for kids are searching for a new way to survive.

YouTube creator Hoya Talk recently uploaded a clip in which he explains the details of the new policy.

In the clip, he said, “You have to think again if you want to join the market and produce content for kids, because you may earn nothing. If you already have channels for kids, I highly recommend you to convert your channel into something different because you can’t give up on your subscribers.”

This is not the first time that YouTube has come up with measures to protect its youngest users. In June, the site said creators who are under 13 would no longer be able to conduct a live stream without being accompanied by a guardian.

In addition, subscribers are no longer able to leave comments on videos featuring minors as a way to protect children from being exposed to malicious or predatory comments.