Power of pennies put to work by banks, card firms

Power of pennies put to work by banks, card firms

“Small change finance” is gaining popularity in Korea as mobile financing services expand and the fintech and “insurtech” industries grow.

As more people move to the mobile sphere to manage their dollars - and cents - fintech companies, banks, credit card companies, insurers and peer-to-peer (P2P) lending services are helping them save, buy stock and sign up for insurance policies with small change. 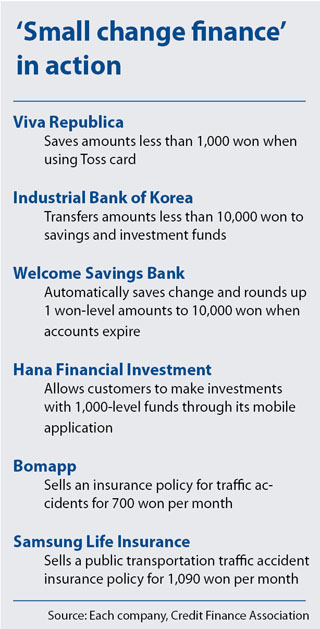 “Pocket change’s reputation is rising as it has caught the interest of fintech and insurtech companies,” said Jang Myung-hyun, a researcher at the Credit Finance Association.

Fintech companies are introducing services that collect change under a certain level from customers’ online and offline transactions and allow them to buy stock when enough accumulates.

A fintech company Tickle transfers any change below 1,000 won ($0.84) from a transaction to the cash management account (CMA) of a client who syncs a credit card with its mobile application. The Industrial Bank of Korea (IBK) is operating a service that automatically transfers change below 10,000 won (or an amount set by its clients) to their savings or investment account for each credit card transaction. Welcome Savings Bank came up with a similar product.

In the United States, the birthplace of small-change finance, one fintech company helps customers pay back student loans by saving change.

Mrs. Shim, a 40-year-old housewife in Seoul, is one newcomer to the penny-investment field. After signing up for a Toss card, a debit card from Viva Republica that offers such micro-investment services, she accumulated more than 100,000 won in just three months.

Viva Republica collected change of less than 1,000 won from Shim’s transactions with the Toss card and saved them to Shim’s account on the company’s mobile-based money wire transfer service app Toss.

“I started [the service] out of curiosity, but saving spare change is quite enjoyable,” Shim said.

Since its launch in July, more than one million Toss Cards have been issued, far surpassing the industrial standard for success of 200,000 issues per month.

Some companies are preparing to start services that allow customers to make investments and buy stock with their pennies.

Shinhan Card and Shinhan Financial Investment are planning a service that rounds up spare change from purchases made on Shinhan cards and invests it in foreign stocks.

If a client pays 5,000 won for a cup of Starbucks coffee that costs 4,600 won, the remaining 400 won will go toward the purchase of foreign shares.

The P2P lending industry, where small transactions are the norm, is a natural in this trend. PeopleFund and HonestFund, two tech-based financial platforms, recently adjusted the minimum transaction amount from 100,000 won to 10,000 won. Lendit halved its minimum amount from the previous 10,000 won to 5,000 won in 2016.

“By lowering the minimum amount to 5,000 won, not only students but also people in their 20s and 30s with low incomes can now make investments actively,” said a spokesperson for Lendit.

An insurtech company called Bomapp - insurtech refers to applying new technologies to the insurance industry - recently introduced a policy that covers possible accidents for commuters for 700 won per month. Despite the small amount, the policy even provides coverage for violent crimes and hospital stays resulting from traffic accidents. Samsung Life Insurance is also in the game with its 1,090 won per month policy for traffic accident compensation.

“Customized insurance services for cars, travelers and pets are on the way,” said Ryu Joon-woo, the founder of Bomapp.

Some analysts say the small change financing market has grown as more people are tightening their belts in the face of an underperforming economy. Pennies have become more valuable for people in their 20s and 30s as they don’t have much to start off bigger investments or saving programs.

“Developing small change finance products is necessary to target people in 20s and 30s who are familiar with mobile devices but don’t have much money for savings and investments,” Jang said.