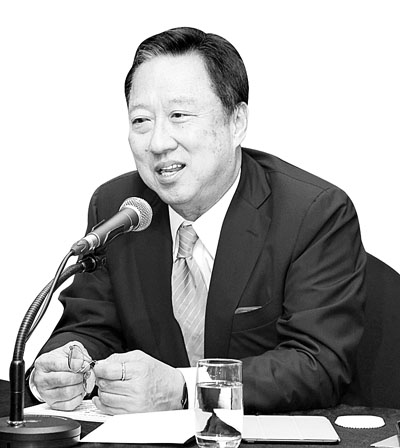 Doosan Group Chairman Park Yong-maan, chairman of the Korea Chamber of Commerce and Industry (KCCI), recently said at a meeting that the Korean economy seemed to be “an abandoned and forgotten child.” [KCCI]

LEE SO-A
The author is an industry 2 team reporter of the JoongAng Ilbo.

The economy is a more difficult issue than politics. You need to know theories and interpret numbers and indices. I’ve never seen ruling and opposition parties engaging in in-depth discussion on the economy, including presidential debates. When I look at recent politics, it seems that Korea and the people’s lives are at serious risk because prosecution reform hasn’t been attained.

The urgent threat now is the economy, not prosecutors. Restructuring as a result of industrial changes are imminent. Samsung and LG Display completely changed their direction to next-generation displays from LCD, for which they were defeated in price competition with China. Hyundai Motor also declared it would focus on future vehicles like self-driving and hydrogen cars. The futures of the workers in the production lines of conventional LCD and combustion engine vehicles cannot be guaranteed.

Who said there is no trickle-down effect on our economy? Many display and automobile subcontractors have begun to suffer damage. You cannot blame the conglomerates. If they fall behind in the areas leading the fourth industrial revolution, they will die out in the global market. From now on, there is a high possibility that similar changes will follow in various industries and businesses, and individuals will suffer great pains.

Exports, which support the economy, have been declining for nine consecutive months. No exit from Japan’s export ban is in sight. But politicians do not talk about the economic crisis. Bills that will help businesses, such as deregulation, are still tied in the National Assembly. It is questionable if there is even a short-term measure, much less a long-term plan to overcome the crisis. I get the impression that they want to avoid the annoying economic issues.

At this juncture, Chairman Park Yong-maan of the Korea Chamber of Commerce and Industry recently said that the Korean economy is “an abandoned and forgotten child.” I think it is an appropriate comparison. “When internal and external negative factors are approaching, discussion on economy is missing,” the chairman said. Of course, the abandoned and forgotten child can work hard and thrive. In that case, will politics take credit for such achievements?