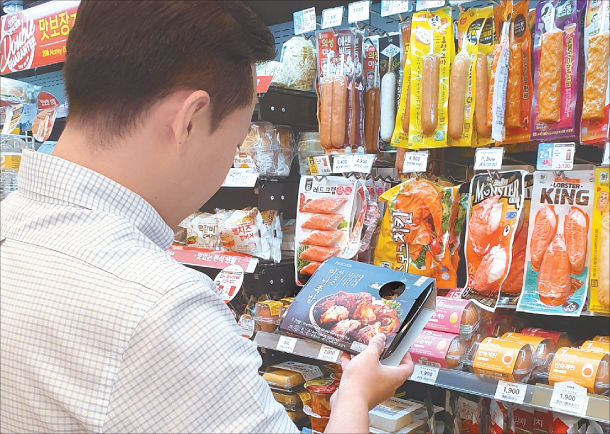 A customer selects anju, or salty snacks for alcohol drinkers, at an Emart 24 convenience store. [EMART 24]

As drinking at home becomes more popular in Korea, convenience stores are quickly replacing bars and restaurants as the best place to pick up anju, or salty snacks for alcohol drinkers.

For a 41-year-old office worker surnamed Kim living in Gwanak District, southwestern Seoul, the local convenience store has become a daily stop-off on his way home from work. When their children are asleep, Kim and his wife like to have a drink together.

“There are all sorts of anju at the convenience store, so it’s quite fun to decide which one to choose,” Kim said. “Recently, I tried frozen raw tuna. The portion was just right, perfect to enjoy at home.”

As ready-made products are served in small portions designed for solo drinkers and are convenient to prepare, more consumers are opting to spice up their drinking sessions with some hot food.

Delivery food, despite its convenience, is often served in portions that are too big for solo drinkers. Increasing delivery fees or minimum order amounts also make ordering in less than ideal for smaller households looking for a snack.

To meet such demand, convenience stores are diversifying the ready-made anju they offer.

While past selections mainly consisted of traditional Korean anju dishes like jokbal, or pig’s trotters, convenience stores have now started looking further afield with dishes like goulash and gambas readily available. Popular Korean dishes that used to only be available in restaurants like dakbbal, or chicken feet, dakgangjeong, or sweet crispy fried chicken, are also becoming increasingly common.

“The introduction of the 52-hour workweek, the trend of avoiding face-to-face contact, the emphasis on work-life balance, the spread of solo drinking and the effects of a tough economic climate have forged an environment in which consumers prefer enjoying drinks and anju comfortably at home,” said an Emart 24 spokesperson. “For this reason, a growing number of consumers are buying drinks along with various types of ready-made anju.”