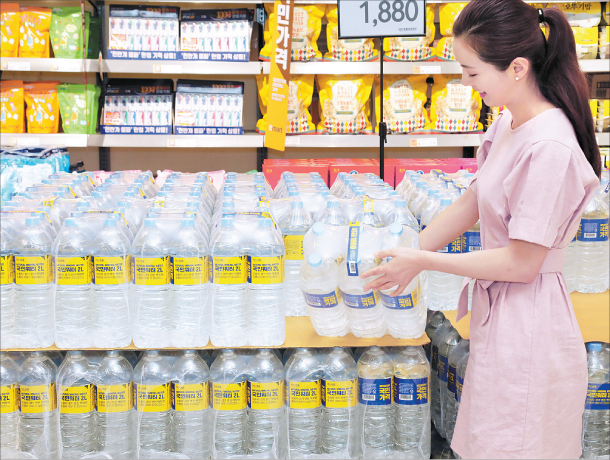 A model shows off Emart’s bottled water on Sept. 18 at the discount chain’s Seongsu branch in eastern Seoul. [EMART]

Discount chains are waging war over water in a bid to undercut competition - both in stores and online - with the cheapest bottled drinking water.

According to retail industry sources on Sept. 18, discount chains including Emart, Lotte Mart and Homeplus are cutting water prices in a bid to attract thirsty customers back into brick-and-mortar stores.

Emart fired the first shot. The discount chain introduced 25 new items to its Everyday Gungmin Gagyeok line, specialized in cheap products, and highlighted its own-brand Emart Water as one of the key products to promote its discount campaign.

Emart managed to cut the price of its water by boosting efficiency in the logistics process. Though water isn’t expensive, the bottles are heavy and bulky, so logistics costs tend to account for a large part of the price.

“By diversifying production sites, Emart logistics centers are able to receive products from a closer location, opening the way for lower logistics costs,” said an official from Emart.

Logistics network optimization is the key. For example, Emart’s branch in Daegu can receive water from a production site in nearby Sancheong County, South Gyeongsang, while a store in Gyeonggi can receive it from a Gyeonggi fulfillment site.

“By offering the cheapest Everyday Gungmin Gagyeo products, we have seen an increase in overall sales through attracting new customers,” said Lee Gap-soo, CEO of Emart. “The plan is to develop products that can not only satisfy customers’ needs but also always maintain the lowest price at all times. At the same time, we will continue to offer existing products to customers by securing extra supply.”

Lotte Mart also is launching its own bargain bottled water. The company announced on Sept. 18 that it would offer Only Price Mineral Water for a week starting Sept. 23 for 1,650 won for a pack of six, two-liter bottles.

Launched in March 2017, Only Price bottled water has been popular as a cost-effective product, recording accumulated sales of 46 million bottles.

Homeplus also joined the water war. The discount chain announced that its bottled water Bareun Saemmul will be available at 1,590 won for a pack of six, two-liter bottles in 140 offline branches and its online store from Sept. 17 to Sept. 24.

The race to pull in thirsty customers is a reaction to the recent dominance of e-commerce websites in water sales.

In the past, drinking water was one of the most popular products that customers bought in bulk along with diapers. However, due to its heavy weight, retailers have lost customers to e-commerce websites with quick delivery deals. The increase in the number of single-person households and dual-income families has accelerated the trend of buying bottled water online.

“The promotion is intended to bring back customers to brick-and-mortar branches by offering drinking water at a cheaper price than e-commerce websites,” explained an official from Lotte Mart.

The local drinking water market’s continued growth is another reason behind the water war. Lotte Mart’s yearly sales of bottled water saw double-digit growth, for the last three years, jumping up 19 percent in 2017, 24 percent in 2018 and 26 percent in 2019.

According to market research firm Euromonitor, the Korean drinking water market doubled in size in four years, from 604 billion won in 2014 to 1.15 trillion won last year.