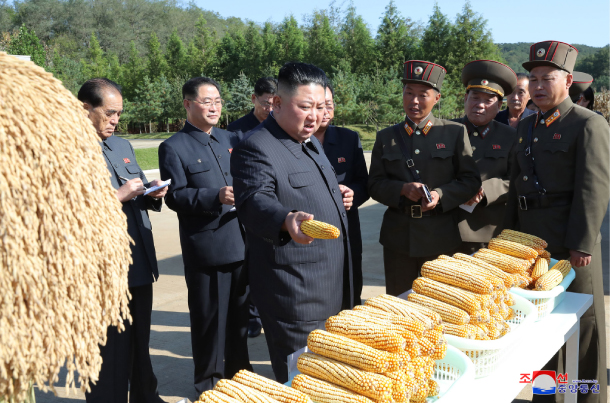 North Korean leader Kim Jong-un looks at corn during a visit to a military farm in a photo released by the state-run KCNA Wednesday, his first public appearance since the nuclear talks with the United States in Sweden last Saturday. [YONHAP]

The chief nuclear negotiators of South Korea, the United States and Japan met in Washington Tuesday and reaffirmed the importance of working together to achieve complete denuclearization and lasting peace on the Korean Peninsula, the U.S. State Department said.

At their meetings Tuesday, the three sides “reaffirmed the importance of continued close U.S.-ROK, U.S.-Japan, and trilateral coordination on North Korea to achieve complete denuclearization and bring lasting peace to the Korean Peninsula,” the State Department said in a statement.

Lee spoke briefly to reporters as he left the meetings but refused to share details.

“We spoke mostly about how to keep the momentum for dialogue [with North Korea],” he said. “South Korea and the United States are coordinating well and we will continue to do so.”

North Korea had demanded that the United States come to the table with a new proposal after their summit in Vietnam in February broke down over differences on how much the North should denuclearize before receiving sanctions relief from the U.S.

Pyongyang has also stepped up calls for U.S. security guarantees for its regime.

In an article published in the Choson Sinbo, a pro-North Korea newspaper based in Japan, the North denounced the South for trying to play a “mediating role” in denuclearization talks between Pyongyang and Washington and claimed that Seoul cannot do anything independently of Washington.

“It is dumbfounding, as what role on earth the South is trying to play at a time when it can’t do anything but just pay attention to what the United States says,” the paper said.

The “field guidance” to Farm No. 1116 under Unit 810 of the Korean Peoples’ Army appears to be designed to underline Kim’s commitment to resolve food problems and focus on economic development despite the lack of progress in Saturday’s talks with the United States in Stockholm.

The Korean Central News Agency (KCNA) did not say exactly when the farm visit was made, as is customary with North Korean state media, but such reporting usually comes a day after the visit. The visit also marked Kim’s first public appearance in about four weeks.

“The only thing we can rely on is the power of science and technology,” Kim said during the visit, according to the KCNA, stressing the importance of training scientists and technicians and taking good care of them.

Kim also “underscored the need for the agricultural scientific research sector to study farming methods for increased production in intermediate and mountainous areas and low-yielding areas and thus provide sci-tech guarantee for attaining the goal for grain production,” it said.