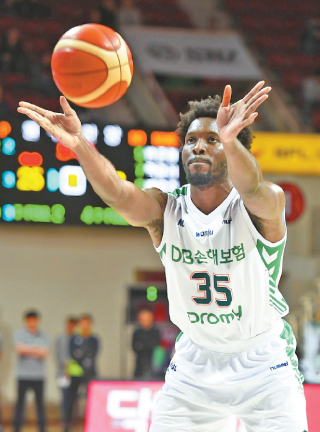 The Wonju Dongbu Promy’s Chinanu Onuaku makes a free throw during a game against the Anyang KGC at Anyang Gymnasium in Gyeonggi Wednesday. [YONHAP]

Chinanu Onuaku of the Wonju Dongbu Promy made headlines for his unique free throw during a game against the Anyang KGC at Anyang Gymnasium in Gyeonggi on Wednesday.

With the KGC leading the game 36-24 in the second quarter, Onuaku stepped up to the free throw line. Unsurprisingly, the tall center hit both of his throws, but how he did it is what made headlines on Thursday morning. Onuaku made both throws with unorthodox underhanded throws, starting with his legs bent as he swung the ball upwards.

Onuaku successfully scored both free throws, and the Promy brought back their lead and won the game 86-81.

This isn’t the first time Onuaku has made headlines with his unusual free throw approach.

After playing two seasons of college basketball for the University of Louisville, Onuaku was selected by the Houston Rockets during the 2016 NBA draft. Onuaku made his NBA debut on Dec. 26, 2016, with the Rockets. During that game, he also scored two underhand free throws. The Rockets won the game against the Phoenix Suns 131-115.

Following his debut, Onuaku played mostly with the Rio Grande Valley Vipers, which is the Rockets’ D-League affiliate. Before joining the Korean Basketball League, he played for the Greensboro Swarm of the NBA G League.

In fact Rick Barry has even commented on Onuaku adopting his famous approach. Back in 2017, the elder Barry told The New York Times, “I admire tremendously the fact that [Onuaku] wasn’t worried about somebody making fun of him. He wanted to try something to get better.”