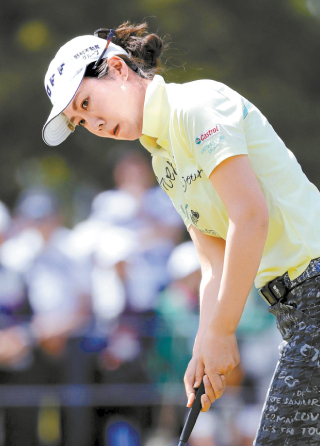 Having made her debut on Japan’s JLPGA Tour in 2001, Lee’s maintained her full-time status on the Tour for 18 consecutive seasons since 2002. This year, despite being the oldest active player, she picked up a win in April. It was her first win since September 2017 and her 23rd career win.

Then, at the most recent tournament last weekend, Lee was en route to pick up another win as she shot nine under par, 63, on the first day of the Descente Ladies Tokai Classic. It was an unforgettable round for Lee as it was her personal best low scoring round and included a hole in one and a score of 28 in the back nine.

“I felt like I did everything on the first day,” Lee said. “But I shot even on the second day and dropped to third or fourth place. So I thought: That’s golf.”

As Lee said, she ended up finishing tied for second with two shots behind Hinako Shibuno. A win could have been another unforgettable career achievement as it was her 500th JLPGA Tour event.

Below are edited excerpts of a JoongAng Ilbo interview with Lee.

Q. You missed out on a win at your 500th tournament. How do you feel?

You also set a record by becoming the oldest player to shoot below 29 over nine holes. What do you think about that?

I don’t really feel [my age], but I hear it at every interview. Every week, the head of the JLPGA Tour will say in his greetings that ‘women’s golf is funny. We see a golfer who is not even 20 win, but we also see 40-year-old Lee Ji-hee win.’ After that, people keep asking me if I’m really 40.

You’ve also continued to maintain your full-time status through the seasonal money ranking. What are the requirements for that and was that also a record?

If I finish within the top 50, I get to compete in all the tournaments in the next year. As I’ve done that for 18 straight years, since 2002, I broke Yuri Fudoh’s record [of 17 years].

Have you ever had a slump?

I didn’t have a big slump. I’m thankful for not having any big injuries. Since I have a very simple personality, I tend to forget easily. I think it’s good to be simple in golf.

Looking back at your 19-year career on the JLPGA Tour, is the 2008 season the year with the most regrets for you?

In 2008, Lee was very likely to top the money ranking but struggled in the season finale. Miho Koga and Yuri Fudoh were in the lead at the last tournament, but after Fudoh three-putted despite being just one meter (3.3 feet) from the hole, Koga ended up winning the tournament and the title. There were rumors at the time that Fudoh intentionally threw away the game to stop a Korean winning the money ranking.

Do you still have regrets?

I vacillated between thinking I should have played better and thinking it was unfair. I could have won the money title if I made a par on the last hole, but I made a bogey. I think that regret led me to continue my career up until now.

Who was your rival among the Japanese golfers?

There is a lot I can learn from Fudoh. Her shots are so accurate that I don’t think even machines can do that. She’s also humble. I respect her.

In terms of accumulated prize money, you are ranked second at 1.195 billion yen ($11 million), behind Fudoh’s 1.364 billion yen. What is your goal now?

Until when are you going to continue your career as a professional golfer?

Were you ever discriminated against in Japan?

When I watch the news, I can see that [the] Korea-Japan relationship is not good, but that has not been the case on the golf course. The gallery looks at me as a golfer. Young Japanese golfers look at me as an older golfer. I like that.

What kind of country is Japan for Lee Ji-hee?

Korea-Japan relations are in a tough and sensitive time, but I have personally received a lot from Japan. From the Tour’s atmosphere, friends, fans and sponsors, I have a lot of great influences.