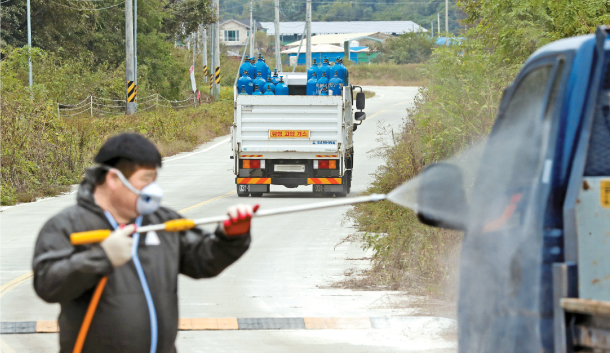 Authorities on Thursday disinfect a vehicle and prepare to cull pigs at a farm in Yeoncheon County, Gyeonggi, where a confirmed case of African swine fever was reported a day earlier. [YONHAP]

The government confirmed a new case of African swine fever (ASF) on Wednesday, again indicating that strengthened containment measures are not working despite six days without additional confirmations of the disease.

The Ministry of Agriculture, Food and Rural Affairs announced late Wednesday night that it confirmed a case of ASF at a pig farm in Yeoncheon County in Gyeonggi, a region that previously had only one confirmed case of ASF since the outbreak last month.

The latest case brings the total number of infected farms to 14.

The government has ordered a 48-hour lockdown on pig farms, slaughterhouses, feed factories and related vehicles in Yeoncheon until 11:10 p.m. today.

Over 8,000 pigs from the infected site and other farms within a 3-kilometer (1.86-mile) radius will be culled, bringing the total number of pigs culled from the 14 confirmed cases to nearly 155,000.

The Yeoncheon pig farm reported suspicions of the disease earlier Wednesday after four female pigs exhibited signs of a loss of appetite, a symptom of the disease.

Prior to the newest confirmation, the nearly week-long streak of no additional cases had led the Agriculture Ministry to focus on preventative measures to completely halt the spread of the disease that had been contained in regions north of the capital and near the border with North Korea.

The ministry had earlier on Wednesday designated six municipalities, including Yeoncheon, situated south and east of the major infected regions as buffer zones with new containment measures.

Yeoncheon was removed from the list of buffer zones, following the confirmed case later that day.

Feed vehicles outside the newly designated zones will be restricted from entering. The feed cargo from other regions will have to be transferred to new vehicles once it reaches the buffer zone.

Pig farms in the buffer areas will also be tested for the virus every three weeks to account for the ASF’s incubation period of 19 days.

Slaughterhouses and feed factories in the buffer regions will undergo sanitation inspections every month.

The government is also purchasing pigs at unaffected farms in the infected regions of Paju, Gimpo and Yeoncheon in Gyeonggi to slaughter for meat processing. It plans to cull any pigs not suitable for meat.

The government has been using helicopters since last week to disinfect border regions where civilians are restricted, including the demilitarized zone, against the virus’ potential spread from sick wild boars from North Korea.