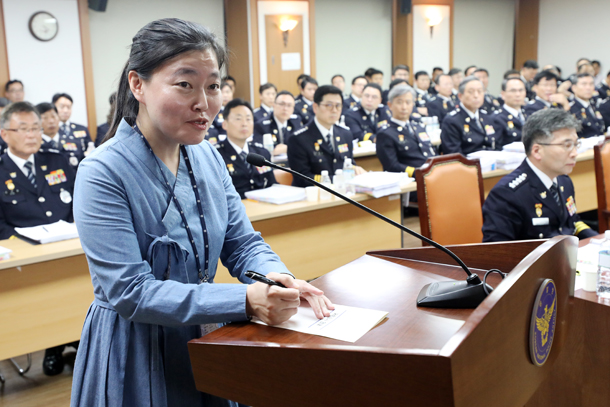 Appearing at the Seodaemun District Police Office on Friday, where the National Assembly’s Public Administration and Security Committee held its regular audit of the National Police Agency, Lim Eun-jeong, a reform-minded senior prosecutor who works in the Ulsan District Prosecutors’ Office, answers questions from lawmakers. [NEWS1]

Appearing before the National Assembly’s Public Administration and Security Committee’s interpellation session to testify last Friday, Lim Eun-jeong, a senior prosecutor at the Ulsan District Prosecutors’ Office, said, “There are so many cases that are investigated if the prosecutor general wants to dig and kill and just as many that are not indicted for a lack of evidence if the prosecutor general is determined to cover up.” She also claimed that “selective justice distorts legal justice.”

She meant that the prosecution’s investigation of the Cho Kuk scandal was a selective investigation and went against justice. Hanyang University School of Law professor Park Chan-un wrote on Facebook that the investigation on Justice Minister Cho was an abuse of prosecutors’ investigative power to kill a certain person. He expressed his anger on selective justice. Last month, a poster was put up at Seoul National University, claiming that selective justice is advocated, ignoring greater social contradiction. It opposed the protesters’ calls for Cho to step down.

Being furious at the prosecution’s investigation of Cho is linked to the rhetoric of the democratization activists in the 1980s. They argued that trivial internal wrongdoings could be condoned in order to stand against the greater evil of military dictatorships. The group sentiment based on the dichotomy of good versus evil was strong. When it added up to serious gender discrimination and personal infringement, they had to keep quiet before the violent justification of “greater justice.”

What about the following case? The photo and identity of the female prosecutor involved in the raid of Cho’s residence were disclosed. Some online comments disparaged her appearance as “she looks anti-government” or “a cake fallen from the rooftop.” It was obviously misogynistic.

U.S. political philosopher John Rowls wrote in “A Theory of Justice” that the theory of fairness was the first principle. Those who advocate justice while neglecting universality may be the most unjust villains.