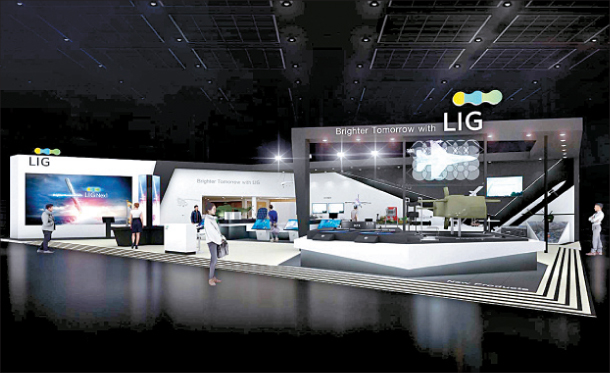 A rendered image of the LIG Nex1 booth to be set up at ADEX at Seoul Airport in Seongnam, Gyeonggi. [LIG NEX1]

LIG Nex1 announced Thursday that it will show off futuristic defense technologies at the Seoul International Aerospace & Defense Exhibition (ADEX) that runs from Oct. 15 through Oct. 20 at Seoul Airport in Seongnam, Gyeonggi.

The Korean defense company is planning to introduce mock-ups of long-range air-to-surface missiles currently in the early stage of development by both the company and the Agency for Defense Development. Mock-ups for avionics equipment currently being developed for installation on the Korean fighter jet KF-X will also be exhibited.

For officials from foreign defense authorities, the company is preparing to put export-targeted products on display, including its 2.75-inch guided rocket K-Logir.

It will also exhibit unmanned drones and robotics products such as robotic exoskeletons for industrial environments.

The company said there will be a zone set up to introduce defense products from its suppliers as it is often difficult for suppliers to set up booths at the exhibition on their own.

“We hope to increase exports of our products through the exhibition,” said Kim Ji-chan, CEO of LIG Nex1.